On July 8, ABM Industries entered into a written agreement to settle the consolidated lawsuits, ABM Industries Overtime Cases (also known as the “Bucio case”), pending in the Superior Court of California, County of San Francisco. Filed in 2006, the lawsuits allege that ABM’s prior timekeeping and payment practices shortchanged as many as 50,000 janitorial employees in violation of the California Labor Code. Under the terms of the proposed settlement, ABM will pay a total sum of $140 million to resolve all claims. The settlement remains subject to court approval. 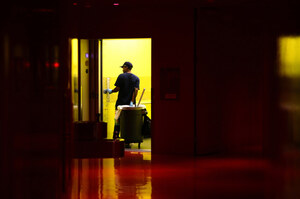 Cost-cutting at the workers’ expense


ABM Industries, Inc. is a large facility services company with employees throughout the United States, including thousands of janitorial workers at hundreds of jobsites in California. The company provides services to clients under contracts obtained through competitive bidding.

In order to compete, ABM offers to provide services to potential clients at fixed, agreed-upon prices. For instance, ABM provided a fixed price contract where the client agreed to pay a fixed fee every month over a specified contract term. Under a similar cost-plus arrangement, the clients reimbursed ABM for the agreed-upon amount of wages and benefits, payroll taxes, insurance charges and other expenses associated with the contracted work.

It was ABM, not the customer, who was responsible for higher labor costs if their employees could not finish their assigned work within budgeted timeframes. The customer paid only the agreed-upon price, regardless of the hours actually worked by employees.

The basic structure of this economic arrangement between the company and the client creates an obvious incentive for the employer to minimize labor costs. In the consolidated complaint, the workers allege that ABM did so in ways that violated the requirements of the California Labor Code relating to meal breaks, the employer’s obligations to pay a premium for missed meal breaks and split shifts, and to reimburse employees for expenses they incurred in order to discharge their duties, such as travel expenses. The actual mechanics of the timekeeping system, abandoned in 2013, are quite complicated in the way that it credited scheduled hours of work rather than actual hours and apparently failed to account for missed meal breaks.

Protections of the California Labor Code and Wage Orders


All of ABM's nonexempt janitorial employees, who provided services under these contracts, were entitled to the benefits prescribed by California labor laws and the related wage orders. Regulations promulgated under the California Labor Code provide that no employer may employ any person for a work period of more than five hours without a meal period of not less than 30 minutes.

Workers must be offered a first meal period after no more than five hours of work and a second meal period after no more than 10 hours of work. To qualify as a lawful meal break under California law, an employee must be relieved of all duties for an uninterrupted 30 minutes. If an employer fails to comply with these requirements, it must pay one hour of pay at the employee's regular rate for each workday that the meal period is not provided. Similarly, under Wage Order No. 5, when an employee works a split shift, an employer must pay a premium in addition to the minimum wage for that workday.

Finally, California Labor Code Section 2802 requires employers to fully reimburse employees for expenses actually and necessarily incurred in the discharge of their duties, including automobile expenses. An employer can discharge its reimbursement obligation in a number of different ways, including through reimbursement for actual expenses or mileage, or through lump-sum payments.

More CALIFORNIA LABOR LAW News
The lawsuits have had a tangled procedural history over the last 15 years. Most recently, the Court of Appeals of California reversed a lower court decision that denied class action status to the lawsuit based on a dispute about the admissibility of expert testimony. The lower court decision would have spelled the end of the consolidated action. Settlement negotiations appear to have moved into high gear after the Court of Appeals reversal.


ABM, for its part, admits no wrongdoing and has simply announced that the company is “confident this settlement is in the best interests of ABM and our stakeholders, as it removes the ongoing costs and uncertainty associated with protracted litigation.” Attorneys for the janitorial workers took a more celebratory tone, noting the 15 years that procuring the settlement took and saying finally that “These workers deserve it.”