Alex Iglesias was involved in a car accident and had to take time off work. Even though his doctor provided HR with a note, he was fired. Even though his company manual said that time off with a medical note, was justified. This is another example of a violation of the California labor law.

"I started working full-time, 40 hours per week for Second Image, a legal copy service, in April, 2007," says Iglesias. "I got a promotion the first month I was there; I was doing a really good job. I went from being an expediter to a customer service assistant which has a lot more responsibility. I asked my supervisor about a raise but she denied me, stating that I hadn't been there for 90 days. In other words, I was promoted with no monetary gain.

On July 24 I was involved in a car accident, after work hours. I went to ER because I had a lot of pain in my neck and back. I went to a chiropractor and he treated me for the injury. My doctor wrote a note for my employer stating that I was unable to work. He faxed a note to my employer weekly for five consecutive weeks. 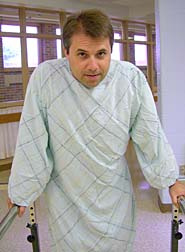 The first week my doctor wrote the note excusing me from work, my co-worker called and told me that all my belongings had been moved from my desk down to the expediting department and someone else had replaced me. I called my supervisor and told her that I was hopeful I could return to work in a few weeks. She then told me that my stuff had been moved. I asked if it was temporary, until I return. She said that no, I was going back to being an expeditor and we would discuss everything when I return to work. I left it at that and continued with my therapy.

Then I got my walking papers.

I received a letter dated August 22nd that said I was terminated due to "company at will" policy. I didn't understand that phrase...

More News
My doctor was going to send me back to work August 29th. I went back that day to collect my personal belongings and return the security pass. I requested to speak with HR so he could explain this policy. He pretty much told me that I missed a lot of hours. But those hours had been excused with a doctor's note. I was really upset because he was patronizing me; I then asked if I could use the company as a reference. 'Yes, he replied. I wanted to confirm with him that I wasn't fired based on my performance.
And I also brought up the fact that I was promoted my first month so obviously I was doing something right.

'Well you were never really here so you couldn't do a good job,' he more or less said.
I told him that he couldn't really say that because I did a good job. I told him about the doctor's notes that excused me for all my time off. He said that he didn't receive all the notes. He suggested that I can reapply to the company and I told him that I wouldn't waste my time because I had been fired.

I was able to collect short-term disability but it will be discontinued in two days. My doctor told me that I can go to the unemployment office and file. But I'd rather be working."