A former sheriff’s deputy who claims he was unjustly fired by San Bernardino County for taking too much time off work to care for his ailing mother appears to be headed for a California wrongful termination settlement. Travis Bauer alleges he was unjustly targeted by his superiors and subsequently fired, whereas his former employer maintains Bauer was given to poor job performance and simply was given to a habit of calling in sick. 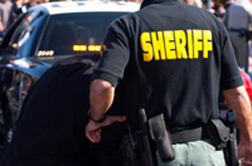 Bauer had originally filed a wrongful termination lawsuit with help from California wrongful termination attorneys - and according to the San Bernardino Sun (7/31/13), the lawsuit may yet go to trial in spite of a notice of settlement reached June 27 at US District Court in Riverside and settled through retired Judge Lourdes Baird acting as a mediator.

According to the report, the plaintiff’s former employers claim that Bauer falsified traffic warning citations in an effort to inflate his productivity while under performance review. The county maintains that Bauer made no arrests, issued a single citation and took 12 reports over a two-year period in 2009 and 2010. Of those reports, according to the defendant in the California wrongful termination lawsuit, two reports were initiated by the plaintiff while the remainder was described as having been assigned by dispatch.

One of the defendants in Bauer’s lawsuit, Captain Mark Marnati, is quoted in the San Bernardino Sun report describing Bauer as “the one that calls in sick all the time,” according to the lawsuit brought by Bauer. The comments were reportedly made prior to Marnati’s promotion to Captain in 2009.

Bauer maintains he took the time off work to care for his ailing mother and feels he should be protected under the Family Medical Leave Act. He is fighting his termination under that federal statute, as well as California wrongful termination law.

More CALIFORNIA WRONGFUL TERMINATION News
According to the lawsuit, Bauer’s mother has a host of ailments, which include but are not limited to degenerative arthritis, bipolar disorder, blackout spells from seizures, strokes and numbness to one side of her body. In his lawsuit, Bauer accuses his former employer and their representatives of questioning his absences under the Family Medical Leave Act by phoning the family doctor tending to Bauer’s ailing mother, as well as inquiring as to where the sick woman was receiving physical therapy.

Bauer also alleges that his superiors attempted to sabotage his career by altering his work schedule without his knowledge, resulting in an absence from the scheduled shift. Bauer, according to the California wrongful employment termination lawsuit, was docked 17 hours pay for his failure to report and was placed on a six-week performance improvement plan.

According to the report, Bauer failed the performance review and was California terminated. He is fighting the termination by way of the lawsuit - which could still go ahead in spite of the motion of settlement - in which he seeks California wrongful termination damages.

If you or a loved one have suffered losses in this case, please click the link below and your complaint will be sent to an employment law lawyer who may evaluate your California Wrongful Termination claim at no cost or obligation.
Request Legal Help Now