A California motorcycle accident killed two and injured two others on Valentine's Day when a car collided with a motorcycle on a twisting section of Highway 74. 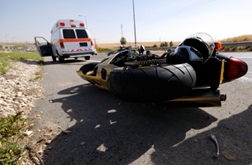 According to a 2/15/10 report in the Desert Sun of Palm Springs, the motorcycle crash occurred at about 1:30 pm on February 14. William Kaplan, 62, of Rancho Mirage, was driving a 2008 Harley Davidson with his wife in the passenger seat when they were struck head-on by a 1998 Toyota Corolla.

The California Highway Patrol said that the driver of the car drifted off the right side of the roadway while traveling westbound along Highway 74, lost control of the car and rotated into the eastbound lane. Kaplan and his wife were traveling eastbound and were unable to avoid the oncoming car in their lane.

Both vehicles were traveling at about 55 miles per hour at the time of impact.

The Riverside County coroner identified Kaplan as one of the deceased. The passenger in the Corolla, 20-year-old Celeste Streutker of Palm Desert, also failed to survive the impact.

All four individuals were airlifted to Desert Regional Medical Center in Palm Springs. Kaplan's 55-year-old wife and the 19-year-old male driver of the Corolla, who hailed from La Quinta, were both being treated at hospital for major injuries suffered in the crash.

If you have suffered losses in this case, please send your complaint to a lawyer who will review your possible [California Motorcycle Accident Lawsuit] at no cost or obligation.
Request Legal Help Now