The City of Tulare has launched a bad faith insurance lawsuit against a Canadian-based insurance company over its refusal to cover medical bills for the deceased daughter of one if its city employees. The lawsuit is the city's response not only to the alleged bad faith insurance issue, but also to a lawsuit filed against the City of Tulare by the hospital at which the stricken 19-year-old had been treated. 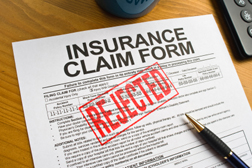 The Fresno Bee (12/22/12) reports that Sun Life Assurance Company of Canada has refused to pay a bill that exceeds US $1 million on grounds that experimental drugs were used to treat the young woman.. Tulare's insurance lawyer counters that said drugs, while not denying their use, was such a small part of the woman's treatment that it does not justify stamping the complete file, 'insurance claim denied.'

The deceased woman at the center of the bad faith insurance controversy was diagnosed in late 2009 with what was reported as acute myeloid leukemia. At the time of her diagnosis, according to the Fresno Bee, the stricken woman was also pregnant.

Following the successful birth of her child in 2010, the woman received a bone marrow transplant and was administered medication to fight rejection??"a standard practice in transplant cases. At the time, according to the report, the woman also agreed to participate in a clinical trial evaluating two experimental drug combinations in an effort to ascertain the most effective outcome in treating her disease.

California insurance laws state that an insurance company is obligated to pay for covered treatment as outlined in a policy??"which is, in fact a contract??"provided premiums are up to date and the policy is in good standing.

Sun Life, however, has reportedly denied the entire claim given the use of experimental drugs. The insurance lawyer toiling on behalf of the City of Tulare points out that the drugs in question amounts to a cost of about $23,000??"a fraction of a medical bill that exceeds $1 million in total. Yet Sun Life denied the entire claim.

It was reported that Tulare self-insures for medical costs on behalf of its employees up to $80,000. Anything above that is handled through the purchase of insurance as a backup, to cover costs over and above that $80,000 self-insured ceiling. The city's normal protocol is to pay hospital bills up front, then recover the costs through insurance coverage after the fact.

The Fresno Bee reports that Tulare, true to its policy, began advancing funds to Stanford Hospital in Palo Alto and had paid $439,500 before learning Sun Life Assurance had denied the claim. Tulare halted payment to the hospital, and indeed asked the hospital to return the funds. While it was not reported whether, or not Stanford has honored the city's request, the hospital launched a lawsuit against Tulare in November.

The City of Tulare, in turn, filed a bad faith insurance lawsuit against the Canadian-based insurer. Sun Life had until the end of December to issue a response.

Health insurance fraud continues to be an ongoing frustration for many well-meaning Americans who maintain insurance faithfully as a failsafe against future catastrophe. Provided criteria in the policy is met, it is the insurance company's obligation to pay out funds in accordance with the terms of the policy, in exchange for the policyholder maintaining premiums and the policy in good standing.

Too many companies, however, habitually practice what many reference as insurance fraud by denying legitimate claims, stonewalling a claim or stalking a claimant in an attempt to justify a claim denial and avoid paying thousands, hundreds of thousands or even millions of dollars.

To that end, any policyholder staring at a 'insurance claim denied' stamp on their claim and contemplating whether or not to fight it, need only be mindful of the gamble that both parties wage in such a scenario:

More CALIFORNIA DENIED DISABILITY INSURANCE News
The insurance company is gambling you won't ever need to file a claim on your policy, and yet they have been paid faithfully every month by the policyholder. You don't get those premiums back if you never file a claim on your policy. Therein lay your gamble??"you pay out all this good money, and never benefit from the policy at all.

An insurance lawyer will remind you that the reason you carry insurance in the first place is to protect yourself and your loved ones against future financial liability. It's the responsible thing to do.

Likewise, it is the responsible thing to do, to honor a legitimate claim. Bad faith insurance occurs when this doesn't happen. Any good insurance lawyer will tell you there are far too many insurance companies violating their policyholders' trust??"and getting away with it.