December was a bad month for car accidents in the Sacramento area. The latest involved a man traveling the wrong way on the freeway in the wee hours on Tuesday, December 29. The car crash killed two individuals, including the wrong-way driver. 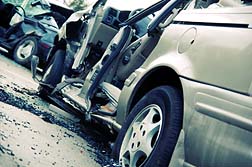 Christopher Dann, 21, was traveling west on eastbound Interstate 80 when he slammed head-on into a Hyundai Elantra coming the other way. The driver of the Elantra, Jessica Ann Faber, 23, was killed. The passenger in her car, Gregory J. Wessels, 23, suffered serious burns and was moved to the UC Davis Medical Center. The car had burst into flames on impact at 3:30am just east of Newcastle Road.

Just one day earlier, Sacramento resident Victor Mendoza, 37, was killed after his disabled car was hit on the driver's side by an Acura MDX SUV. According to the CHP, the accident happened on Northbound 99 just south of the Stockton Blvd. off ramp. The SUV swerved and came into contact with a concrete divider, leaving the vehicle pointing southwest in a northbound lane.

More CALIFORNIA CAR ACCIDENTS News
A passenger safely extricated himself from the SUV, only to watch in horror as the Chrysler Cirrus, with Mendoza still inside, was broadsided on the drivers' side by the SUV. Mendoza was killed. The driver and occupants of the SUV were taken to local hospitals.

A Fatal Accident Before Christmas

A week before Christmas, a two-car crash killed one Sacramento woman and injured another. According to the California Highway Patrol (CHP), Monica Colton, 36, was driving west on Madison at 12:45 am when she collided with a vehicle belonging to Kym Goodman, 49. Goodman had been driving east and was turning north through a signaled intersection onto Auburn when the collision occurred. Colton was killed, but Goodman was spared more serious injuries after passersby pulled her from her car, which had caught fire.

The Sacramento Bee reported that one of the two cars ran a red light. The CHP investigation was attempting to determine which one was at fault.