It could have been worse. A Los Angeles car crash that occurred two days before Christmas injured a young child and several others—but no deaths were reported. 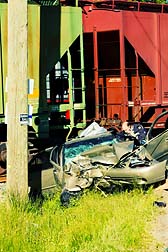 According to the Christmas Eve edition of the Los Angeles Times, the driver of a white Toyota Camry had pulled over to make way for a police car with activated sirens, when it was suddenly rear-ended by a Nissan pickup truck. The collision forced the pickup truck onto nearby train tracks, where it was subsequently struck by a Metrolink commuter train. The accident happened at 7 am on Wednesday morning in the San Fernando Valley,

Eyewitnesses told the LA Times that the northbound Camry had pulled over near Branford Street to allow for a speeding police car coming in the opposite direction along North San Fernando Road in Pacoima. The Nissan truck hit the mid-sized car hard in the rear.

The force of impact knocked the pickup truck onto the rails and the car onto a dirt strip along the tracks. Following the collision with the train, the truck wound up on its roof. A spokesperson for the Los Angeles Fire Department said that the truck was so badly damaged they could not immediately identify the make or model.

A toddler strapped into the rear seat of the Camry and the 38-year-old driver of the pickup both sustained critical injuries.

The injured child was airlifted to Children's Hospital in Los Angeles. Meanwhile, the child's mother and her boyfriend were taken to Providence Holy Cross Medical Center in Mission Hills, where they remained in stable but guarded condition.

A Metrolink spokesperson confirmed that eight of the 36 passengers aboard the commuter train complained of minor injuries.

More CALIFORNIA CAR ACCIDENTS News
Investigators will be consulting data from a series of cameras installed on the Metrolink train in the aftermath of the deadly Chatsworth train collision in 2008. The $1 million initiative put cameras on all Metrolink commuter trains in October. One camera focuses on the tracks in front of the engine, another on the engineer in the cab, and a third on the control panel.

Other available data includes the speed of the train, radio transmissions and braking distances—not unlike a black box from a commercial airliner.

The LA Times reported that Metrolink was also working to isolate train traffic through the construction of overpasses at intersections where train and vehicular traffic intersect. It was noted, however, that such a grade-separation of the entire system could cost billions.