California's 18-month-old ban on hand-held cell phone usage in cars seems to have made no difference on California car accident statistics, reports the Highway Loss Data Institute. The California Highway Patrol (CHP) has disputed the results of the study, according to KABC Los Angeles. The CHP has issued 231,000 tickets since mid-2008 and says that crashes and fatalities dropped 20 percent in the first six months after the hands-free legislation went into effect. 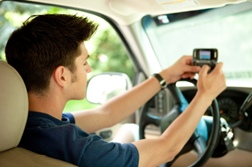 "When folks are distracted and they're not paying attention to their driving, they're putting themselves at risk and other motorists in the state of California," CHP Officer Adrian Quintero told KABC.

However, the researchers responsible for the study are affiliated with the Insurance Institute for Highway Safety, and the conclusions of the study carry fair weight in some circles.

The study found that collision claims in the state of California were similar to those in surrounding states that have not yet enacted hands-free legislation. The researchers maintain that if states are really serious about reducing crashes and increasing safety on the road, they should ban all activities that district drivers. Obvious examples include applying makeup and doing crossword puzzles behind the wheel, but a comprehensive ban would be next to impossible, given the inherent complexity of modern cars that come equipped with increasingly sophisticated electronics.

More CALIFORNIA CAR ACCIDENTS News
Unfazed, California Senator Joe Simitian has an eye to making the existing law tougher rather than relaxing it. According to KABC, lawmakers have talked about tripling the existing fine, or citing the use of a hand-held device while driving as a moving violation that will impact an individual's driving record. They are also considering extending the law to cyclists.

"I feel like it's an infringement on my rights," says Allen Gong, who has gotten a ticket for a cell phone violation. "If they make it a moving violation, if it affects my insurance, they're going too far with that. You can say the radio is too loud and what? We're going to get a ticket for that too now?"

Keith James, however, sees things differently. "I had a niece involved in an accident with someone using their handset to their ear," James told the LA-based TV station. "So I definitely think using the Bluetooth is beneficial."