Alcohol May Have Contributed to California Car Crash

Local authorities are blaming alcohol for a California car crash that claimed the life of an Escondido-area high school student this past week. 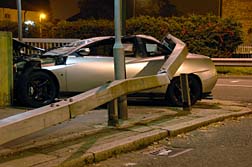 Seventeen-year-old Veronica Elizabeth Aguirre was driving home from a party after midnight when her vehicle began drifting towards the shoulder. Aguirre lost control and rolled several times before landing upright in the eastbound lane. She was pronounced dead on the scene.

More CALIFORNIA CAR ACCIDENTS News
Aguirre, who had allegedly been drinking, had reportedly refused a ride home from a friend, according to a report from the Examiner.

"She was definitely very, very drunk," says Ashley Valenzuela, the friend who offered to pick up Aguirre from the party, tells the San Diego Union-Tribune. "She texted, 'I'm hammered.'"

In a separate incident occurring later that night, a single car crash killed the 18-year-old passenger of a black SUV when its driver lost control, striking a eucalyptus tree. The California Highway Patrol (CHP) believe that alcohol or drugs were a factor in the accident, claims the Union-Tribune, though no further details were available at the time of writing.

The incidents are the latest in a string of car crashs that have claimed the lives of seven North County teenagers since September. All but two of the accidents involved alcohol.