In the aftermath of a California car crash that took the life of a 10-year-old girl last week, the driver of the doomed vehicle was arrested on November 25 on suspicion of murder and child endangerment. 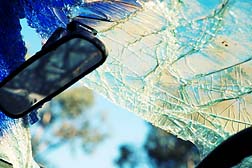 The Sacramento Bee reported on November 26 that Arnold Barraza, 25, of Woodland, was arrested at the UC Davis Medical Center on one count of murder and two counts of child endangerment under circumstances likely to produce great bodily harm or death, according to the California Highway Patrol (CHP).

The dead girl's mother, Cirena Martinez, 28, was also arrested at the medical center on three counts of child endangerment.

"Both Barraza and Martinez were arrested and released at the hospital due to the extent of their injuries," the CHP statement said.

The CHP reported that the 2009 Mazda 3 sedan driven by Barraza was traveling at an estimated 85 miles per hour—more than twice the posted speed limit—when the car spun out of control and crashed. The driver and Martinez were properly buckled into the car with proper restraints, but the three children were not, even though the car was equipped with the requisite child safety seats.

The three children were hurled from the car. The 10-year-old girl, identified by relatives as Destiny Martinez-Gonzalez, was pronounced dead at the scene. Her 4-year-old sister Elise Gonzalez suffered major injuries and has since been released from the hospital.

Both girls are Martinez's daughters. Barraza's 1-year-old son, Arnold Barraza Jr., was critically injured in the crash and remained at the medical center as of Thursday.

Investigators are looking into the possibility that alcohol might have been a factor in the tragedy. Barraza has twice been convicted for driving under the influence, according to Yolo County court records.

More CALIFORNIA CAR ACCIDENTS News
In May 2005, he pleaded no contest in Yolo Superior Court to a misdemeanor charge of driving with blood-alcohol content at, or above the legal limit. In their charging document, prosecutors cited his DUI conviction in Tulare County from March 2000, when he was 15.

His criminal record as an adult includes a three-year state prison sentence and convictions for assault, attempted auto theft and resisting the order of a law-enforcement officer with the use of force, court records show.

According to the account in the Sacramento Bee, Barraza and Martinez are in a relationship. The couple was returning from Tulare to pick up Barraza's son for a visit when the accident happened on County Road 22, east of Woodland.