Car accidents have been taking their toll on the California highways lately. The California Highway Patrol (CHP) has reported three recent California auto accidents that ended in death. 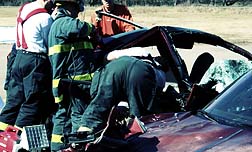 Heavy rains and a wet roadway factored into a three-vehicle accident on November 20 that took the life of a 19-year-old student from Humboldt State University.

The California Highway Patrol told the Eureka Times Standard on November 22 that Eric Kilgore, 19, of San Bernardino, was traveling southbound on US Highway 101 just after 3pm on Friday when he lost control of his vehicle at a curve in the highway.

Kilgore's 1998 Mazda 626 crossed over to the northbound lanes and sideswiped a Toyota Corolla before being broadsided by a Chevrolet Tahoe. "The force of the second impact was devastating and resulted in the fatality of Kilgore," reported the CHP. "Preliminary investigation at the scene revealed that Kilgore was a student at Humboldt State University, possibly traveling home for the Thanksgiving holiday."

Meanwhile, a 10-year-old California girl was killed on November 23 when her 25-year-old father lost control of the vehicle. The Sacramento Bee reported that the vehicle overturned near Woodland. Four other members of the family were critically injured, including a one-year-old boy.

All five family members were ejected from the vehicle. The 10-year-old girl died at the scene, and the four survivors were transported to the UC Davis Medical Center in Sacramento.

More CALIFORNIA CAR ACCIDENTS News
Police report that the driver was traveling at 85 miles per hour—nearly twice the posted speed limit—when he lost control of the car.

The names of the dead and injured were not released.

In another tragic case, a suspected drunk driver killed two California residents on November 8 when he hit their Honda Accord while traveling northbound in the southbound lanes of Highway 101 in Goleta. The CHP was alerted too late to prevent the crash, but arrived in time to witness the accident.

Marcos Arredondo, 18 and Macrina Ocampo, 58 were killed. Two others in the Honda sustained major injuries. KCOY-TV, the CBS affiliate television station for the Central Coast of California, reported the wrong-way driver was arrested on suspicion of felony drunk driving and vehicular manslaughter.