Officials investigating a California car accident that critically injured reality TV star David "Puck" Rainey and his eight-year-old son now claim that alcohol may have been involved in the incident. 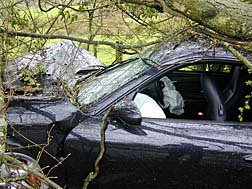 A spokesman for the California Highway Patrol (CHP) told TVGuide.com that Rainey, who starred in the San Francisco season of MTVs pioneering reality show "The Real World," was arrested for driving under the influence and causing an accident the San Francisco Chronicle described as "near-fatal."

More CALIFORNIA CAR ACCIDENTS News
According to a TMZ report, Rainey and his son were returning home from a fishing trip when a deer wandered onto the road. Rainey swerved to avoid the deer, lost control of the vehicle and fell down an embankment. The car landed on its roof in a stream bed.

Rainey's son managed to free himself and flag down help. The boy suffered injuries to the liver, but was soon released from the hospital. His father remains under professional supervision due to broken bones in his neck, both feet and his right hand.

"He was arrested for suspicion of driving under the influence, however he remains in the hospital due to his medical condition," said CHP representative Brian Pennings. "He will be facing charges of DUI, child endangerment and driving without a license."