Yet another diabetes drug has come under fire, after it was revealed yesterday that Byetta, manufactured and distributed by Eli Lilly and Amylin Pharmaceuticals, could be linked to acute pancreatitis in some patients.

Pancreatitis can develop quickly and most often subsides quickly in most patients. However, this inflammation of the pancreas has the capacity to destroy pancreatic function if left untreated, according to the Merck Manual of Medical Information.

In issuing the alert yesterday, the U.S. Food and Drug Administration (FDA) revealed that 30 patients exhibiting symptoms of pancreatitis had been treated with Byetta. The FDA is on record as suspecting there may be an association between acute pancreatitis and the use of Byetta in some of those cases. 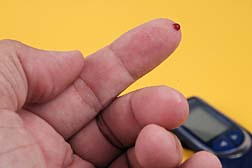 Known generically as exenatide, Byetta first appeared on the US market in the middle of 2005, and has grown to become quite popular for the treatment of Type II Diabetes. Users of Byetta worldwide total 700,000. A benefit of Byetta is the drug's ability to help patients shed excess pounds.

Given that annual sales are projected to reach US $4.18 billion within the next five years, it's no surprise that Ely Lilly Co. and Amylin have big plans for the product, which in its present form is administered by injection twice daily. A pending variation of Byetta, known as Byetta LAR, is a once-per-week formulation that would further boost sales, were it approved.

Yesterday's alert by the FDA cost both companies on the stock exchange. Eli Lilly and Amylin were down 1.5 and 3.9 per cent respectively. A third enterprise, Alkermes Inc, a drug-delivery tech company with a stake in the development of Byetta LAR, saw its shares fall as well.

Eli Lilly Co, based at Indianapolis, claims 50 per cent of the gross profit from US sales of the drug and pays Amylin a royalty on foreign sales.

According to the FDA, 27 of the 30 patients identified in the alert presented at least one additional risk factor, such as alcohol abuse or gallstones. Twenty-one patients required hospitalization, and five developed serious complications.

More News
A spokesperson with Amylin indicated that the company would be forwarding information to doctors about the pancreatic issue. For its part, the FDA is suggesting that doctors inform their patients to watch for any persistent, unexplained abdominal pain, which could be quite severe. The discomfort may--or may not be--complicated by vomiting.

Further to that, the FDA says that Byetta treatment should stop immediately, if and when pancreatitis is first suspected. Were pancreatitis to be confirmed, it is the position of the FDA that Byetta should not be restarted unless an alternate cause of the pancreatic is identified.

Amylin has agreed to strengthen existing language on the product warning label to address the possibility of acute pancreatitis. A spokesperson from Ely Lilly said reference to pancreatitis was included on product labelling late last year.

If you or a loved one has suffered from acute pancreatitis after taking Byetta, please contact a lawyer involved in a possible [Byetta Lawsuit] who will review your case at no cost or obligation.
Request Legal Help Now