Attorney Peter Kovacs: "Let's get down to the nitty-gritty here." 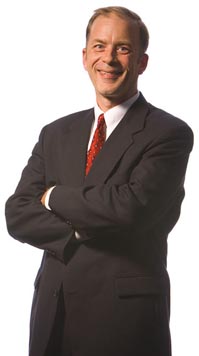 At the heart of the suit, Kovacs says, is Veolia's habitual overcharging of customers based on overestimated usage. "There was a significant public controversy, people writing letters to the editor, articles published about the water bills people were getting being ridiculous," he says. "It wasn't a matter of the rates being too high—it was that Veolia wasn't reading customers' meters every two months the way they're supposed to. Instead, they were using some funky methodology to estimate water usage."

"People would be going six or seven months with no meter reading, then getting a huge credit with a note from Veolia saying, 'Oops, we overestimated; here's your money back.' In effect, they were lending Veolia their money at no interest, and with over 250,000 people in the system, you're talking some real money."

Veolia is required by tariff to read customer meters every two months, Kovacs says. "They've promised to do that, it's a promise we can hold them to. They way it works is that the system is owned by the City of Indianapolis and managed by Veolia. The city, via the Department of Water Works, has the tariff on file with the state Utilities Commission. Veolia is obligated to adhere to that. And they haven't been."

Veolia has managed the city water utility since 2002, when the city purchased the utility from Nisource and simultaneously entered into a management agreement with Veolia. "We don't know yet how far back this overcharging goes, but from feedback we've received, it's at least the last two years. That's why we have discovery."

With 250,000-plus customers in the city of Indianapolis and surrounding counties, Kovacs says, "The class could ultimately encompass them all. That's what I've proposed. I'm thinking this involves everybody; that's the thing about suing utilities in a class action—if they've done something wrong, it affects everybody."

"We'll be seeking some sort of compensation, plus going forward some sort of remedial effort, so that Veolia does what they say they will. The tariff is approved by the state Utilities Commission and contains fees and terms and conditions of service. Once it's reviewed and approved, you're bound by it at that point. We've alleged deceptive practice, which is a statutory cause of action. The way I analogize a tariff, it's a contract between the utility and the customers, more contractual in nature almost. So we also have a breach of contract allegation in there."

Since the suit was filed, Kovacs says, "It's gotten extensive media coverage, and as a result we've gotten hundreds of phone calls and e-mails from people saying, 'Hey, this is what happened to me, I'd love to help.' So we're just starting to scratch the surface. No one has appeared from the other side, so who knows what their position is? They've really withheld comment the last week or so."

During discovery, Kovacs says he hopes to find out several things about Veolia's practices, "Perhaps an explanation of the methodology of their estimating process and their methodology of meter reading. It's clear that they have to do this every two months. They might say they can't because of bad weather or vicious dogs, but that's all hokum. Let's get down to the nitty-gritty here—were they trying to save money or what?

"There's another aspect to this, which is that Veolia gets paid incentives by the city of Indianapolis for meeting certain benchmarks, including meter reading. Last year they got $350,000 for supposedly meeting the meter reading benchmarks. We're wondering if the city was getting ripped off as well, because from where I'm sitting they weren't meeting those benchmarks.

"I don't know how they're going to approach this. It could be three year battle or I could get a call from them tomorrow saying, 'Hey, let's talk.' In any case, we intend to move it along vigorously."

Peter Kovacs, a 1984 graduate of the Univesity of Connecticut, received a J.D. from the Indiana University School of Law in 1992. The son of a German-born mother and a Hungarian-born father, he says that being raised as a first-generation American by hard-working parents without formal educations helped instill in him a strong work ethic. It also gave him a devout appreciation of the American judicial system. "The liberties and the freedom our system provides and that our judicial system safeguards are things that my parents didn't have when they were growing up. Now, I'm in the position to contribute to that," he says.