Attorney Maurice B. Graham is a partner in Gray, Ritter and Graham, PC, a personal injury and complex business and commercial litigation firm. A 1962 JD graduate of the University of Missouri, Graham is former president of the Missouri Bar Association (1988-1989) and has served as a member and chairman of the Supreme Court Advisory Committee, which oversees attorney discipline in Missouri. LawyersandSettlements spoke with him at the beginning of what promised to be a busy day.

LAS: Can you describe your areas of specialization? 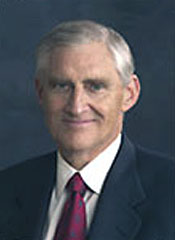 LAS: You were recently involved in a personal injury case that was featured on CNN, the Debbie Shank case.

MBG: The Shank family was referred to me by another lawyer. It was shortly after this tragic accident in southern Missouri in 2000 in which Debbie Shank received serious and permanent brain injuries when her mini van was struck by a truck. I've represented them since the very beginning.

LAS: So initially this was a personal injury liability case?

MBG: There were some liability issues. Mrs. Shank was driving her mini van on a straight and level state highway in clear weather during the day and apparently made the decision to turn around and go back the way she had come. She pulled over and pulled back onto the highway to turn around, and as she did so a transport truck coming down the highway saw her, but did not stop or swerve out of the way. It was our position that the driver had enough time and distance to swerve or stop, but he didn't. He struck her broadside.

We established with an accident reconstruction expert that the truck driver had had room enough to stop or swerve even though she had pulled out onto the highway, and also that he had been driving somewhat over the speed limit. In Missouri, we define this as a "comparative fault" case. There was no doubt that Mrs. Shank had made a mistake, but the truck driver had also contributed to this unfortunate incident. It was a contested case that required accident reconstruction experts.

The case was complicated by the fact that the small trucking company the driver worked for had few assets and the absolute minimum of liability insurance required by law. We were eventually obliged to make what we called an inadequate recovery of damages because of that. They didn't want to pay anything initially because they said it was her fault.

Our evidence was that her future damages for health care, loss of income, pain and suffering, all of those, would well exceed $2 million. Had we been dealing with a solvent, responsible company, she would have recovered much more than the $1 million we received in 2002. It took a lot of work and time to achieve what we did because of the circumstances.

LAS: Some time later, there was further legal action by her employers. Can you describe what happened?

Mrs. Shank was an employee of Wal-Mart and was covered their employees' insurance contract. When we were finally able to settle the original case, the settlement was divided between Mrs. Shank and her husband; the portion paid to Mr. Shank was used to purchase a home for the family that was handicapped accessible. The home they were in at the time of the wreck was small, had narrow doors, and the bedrooms were all upstairs, so there was no place to take care of her. So his portion was used to provide for Mrs. Shank's care when she could still come home for visits. She can't come home any more; she requires full-time care in an institution.

The balance of the settlement was put in trust for her health care. That was the part that was claimed by Wal-Mart for their medical expenses.

Wal-Mart claimed almost all of what was in trust for her care?

MBG: They sought to recover the full amount of the medical bills they had paid, which was nearly $500,000. The basis of that was the insurance contract they have with their employees, which stipulates that they can recover all medical expenses that they incur if the employee wins a liability suit, as well as federal law that allows them to get that money back. This kind of provision was unusual years ago, but it's becoming more prevalent; many companies have those provisions in their insurance contracts now.

Mrs. Shank's true losses due to her injuries were millions of dollars, but because the trucking company had such inadequate liability insurance, we were only able to recover about one million. It's our position that Wal-Mart should share in that loss because of the inadequate liability that the company carried.

It's our position that the court needs to look at what comprises an "equitable recovery" in cases like these. The court ruled that full recovery of Wal-Mart's expenses was an equitable recovery, but in the original case, we had to bring in outside lawyers to help us get the best settlement we could. The interpretation of the federal law was not as clear then as it is now; there was a division in the interpretation of cases—some cases upheld employers getting all their money back, others didn't. The law was uncertain then.

The Shanks are now left with no further legal recourse. We've exhausted all appeals. A three-judge panel of the 8th Circuit Court of Appeals decided in Wal-Mart's favor; we asked the court en banc [in full] to hear the case, but only three of the judges were in favor, and the others were not. We then asked the US Supreme Court to look at the issue, and after several months they also refused to hear the case. So that leaves the 8th Circuit panel's decision in effect. This means that people like Debbie Shank may have to look to Congress for legislation that will clarify the definition of equitable recovery.

If you talk to the companies, they'll say it's fair. They pay out a lot of money for insurance and medical expenses for their employees and they have the right to fair recovery, and it's not their fault if the employee didn't get full recovery.

The courts need to examine what is equitable recovery in cases like this. The way the law is interpreted now, the employer's recovery is not equitable when the employee is catastrophically injured and cannot make a full recovery because the other party is inadequately insured. That's exactly what happened here.

The trend in these cases has been unfortunately not to look at what constitutes equitable recovery, even though the law requires that. I think this calls out for federal legislation to correct what the courts have concluded is the law. I think they have interpreted this law in a way that was unintended. Congress needs to make it clear that in these unique instances, the employer has to share the loss with the employee.