Roger L. says he is lucky to be alive after a propane explosion leveled his home. "The neighbors heard it from miles around and my wife thought we had been bombed," he says. Roger is a retired criminal investigator and that probably saved his life; because of his police training, he had the sense to hold his breath and crawl to safety. But his burn injuries almost killed him.

"On January 24, 2006 I was melting lead weights for duck decoys in my workshop that was attached to my house, right off the carport," says Roger. " I was having some difficulty lighting the torch—strange because I had been working with a torch and propane for a number of years. I thought the tank was empty so I switched tanks and couldn't get the second one going either. Eventually I got the torch lit and finished the job. Then I turned the tank off and as I started to walk away, I heard a noise. I turned back to the tank and saw a small blue flame that appeared to be coming out of the top of the tank near the torch attachment. 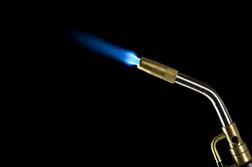 My immediate thought was that there must be a broken thread so I reached for the tank (I was going to try to turn the torch so it would go out) but before I got to the tank, it exploded.

When I opened my eyes, the ceiling was on fire, the walls and floor was on fire - the whole house was on fire. As I reached out to get myself up, I realized that it had blown me clear down to the end of the house—a good 20 feet. Luckily the door was open to the shop because it blew me down the hallway. It blew all the doors and windows out of the house.

It happened around 10pm; our neighbors came running. My wife was on the main floor-upstairs. She was right over top of the explosion and didn't get hurt at all. I held my breath and began to crawl up the stairs but my hair and skin was peeling off and my lungs were scorched. When I got to my wife, she was screaming. Luckily she had the phone in her hand--I told her to call 911 and say 'House engulfed, critically burnt patient, need helicopter'.

She repeated what I said. We had no time to take anything with us - we lost everything. The phone is all she took with her.

The first thing I asked her when we got out of there was, 'Do I have a face?' She looked at me and said, 'Yes'. That was very reassuring. But I have had multiple plastic surgeries since then and I have had enough pain in my life that I won't have any more.

I remember getting loaded into the helicopter and praying for the pilot and navigator because it was snowing and they were risking their lives for me.

The doctors want to know what I am made out of! I was fried from the initial blast—thank God I blinked when it blew otherwise I would also be blind. When I got out of the hospital six months later, my friend had rented a house to us. And that is where we are today, while we build a new house.

I'm confused. Do you go after the propane tank people, or the torch people? I had taken a new propane tank out of the package and the other two were sitting nearby. I don't even know if they all exploded at the same time; I had no idea that one little propane tank (a hand-held tank) could do so much damage.

More News
The fire marshal investigated and came to the conclusion that the tanks exploded. There was nothing left to really look at. My insurance company covered my medical bills but they haven't covered my house yet. I am still dealing with the insurance agents—and getting advice on how to deal with my agent. They haven't contacted me to make an offer. I sent them a list of all my possessions and the value of the house by certified mail a few months ago; it seems like something plain and simple but not to them. Early on, my wife dealt with them and they paid for the dumpster to clean up the rubble and ashes and that is all they have paid out in property value so far.

I don't know what to do next. Our next step is to get legal help otherwise this could drag on until a statute of limitations runs out..."

A lawyer can definitely advise Roger on what he should do next, and whether or not there is a statute of limitations.