Wanda G. is an experienced OR nurse who has seen her share of injuries, including burn injuries. However, when she had surgery in April 2007, she had no idea that she could possibly wake up from the surgery with burn injuries of her own. Yet that is exactly what she says happened.

She went for surgery because she had herniated nerves in her neck. Although she does not remember waking up after the surgery, her husband told her that she woke up screaming in pain so she was sedated for three days. After three days, she again woke up screaming because of the pain in her right arm, caused by nerve damage.

"I don't remember at all, but my husband said I was just screaming. You couldn't even touch my arm lightly, just couldn't do it. I still have a lot of arm pain, but it comes and goes. Right now it just aches. I get pain in both arms but the right arm is the worst one. The severity of it comes and goes, but it often feels like it's being stabbed or burned." 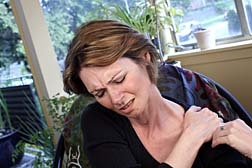 Wanda says she was told that her injuries were caused by "overstimulation from inter-operative EMG." However, she believes that she was electrocuted during surgery, which may have caused her arm pain and a burn that showed up on her hand. "There was a burn on my left hand and I know what a surgical burn looks like," Wanda says. She explains the mechanics of her surgery as such:

"Prior to surgery, when they are testing for conductivity of nerves, they put patches or needles in you, hook you up to a machine and put little shocks through it to see if your nerve is actually working properly because the brain and the nerves have to communicate properly. During surgery, they sometimes use a bovie, which coagulates bleeders so they do not have to use a clamp or tie. When they use a monopolar bovie, the patient must be grounded otherwise he or she will be electrocuted and will have a burn. During my surgery they did an inter-operative EMG so that the doctor could tell when he got near a nerve. The doctor says that I was burned because of the wiring they put in me. But when I have a burn on my hand and I wake up with nerve pain, it doesn't compute with me, knowing what I know about burns. My burn was small and it took months to heal. It was a second-degree burn.

"Nobody even treated my burn—they never said anything. They should have treated it. I put ointment on it.

More News
"I've had a few surgeries but I've never been scared of having surgery. I am now. I cried for six weeks at home, I felt like someone was stabbing my arm constantly because of the nerve pain and nerve damage. I'm no baby, but I cried a lot. It hurt like hell and pain pills didn't help."

Wanda says she has had to leave her job because working in the OR was too physical and exacerbated her problems.

"Burns should not happen, whether they are laser burns or electrical burns. Patients need to be properly grounded. People complain that there are too many lawsuits, but I don't think there are enough because there is something going on all the time. A person who is not an insider does not know the right questions to ask."

Unfortunately, burn injuries do happen to patients who are undergoing surgery. Sometimes, such injuries are the result of negligence on the part of the staff performing the surgery. When this happens, patients may be eligible for damages and compensation for medical bills and lost wages.

Posted by
Mary Anthony
on March 24, 2017
I'm still suffering from a burn during surgery three months ago. I cannot get proper treatment because of the clinical neglegance, double neglegance. Whatever happened to medical professionals that took an oath to heal and protect their patients.please bring them back.
Posted by
Nurse
on May 11, 2013
I cannot tell you the emotions I experienced when reading about Wanda. The same happened to me last year and I used to work in theatres. I have suffered horrific internal electrical burns at the hands of a surgeon and no plastic surgeon will see me because it was clinical negligence. I have a lawyer but would so like to be put in touch with Wanda as I know exactly what she is going through; the pain is indescribable.