A man who was burned over 65 percent of his body was awarded more than $27 million by an eight-person jury. The plaintiff suffered burn injuries during an industrial accident at a biomass power plant. As a result, he had to go through 27 surgeries and spent more than eight months in the hospital.

The jury found that North American Industrial Services, hired by the plant to remove clogs from machinery, was at fault for the plaintiff's injuries. In total, the plaintiff received $27.26 million, plus $250,000 to his wife for loss of companionship. The accident occurred after a vessel that separates solid material from hot gases became clogged by ash and slag (a molten material). The plant shut down and North American Industrial Services was called to clear the block. The victim, who was an employee of the plant, was standing below an opening on the blocked vessel when lava-like material spewed from the opening. 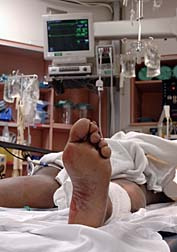 Meanwhile, a homeless man has filed a lawsuit against Kentucky Fried Chicken, alleging he was seriously injured when a KFC manager poured scalding water on him. The plaintiff claims he spent 13 days in a burn unit with injuries to his face, back and the left side of his body. The lawsuit seeks at least $25,000.

A new, fairly unknown type of fire may be a bigger risk than previously believed. The fire is known as an operating room flash fire. More and more reports of these flash fires have been made public and now people are becoming more aware of the danger. Patients involved in the fires can suffer first-, second- and third-degree burns and in some cases, patients have died from their injuries.

According to [Boston.com], Pennsylvania has had 28 operating room fires every year for the past three years. Furthermore, there may be hundreds of such fires every year nationally—much higher than the 50 to 100 fires previously estimated. Many of the fires occur during throat surgery, in which case the fire is more likely to be fatal. Lawsuits have been filed against doctors and hospitals alleging negligence and malpractice in allowing the fires to occur.

More News
There are many hazards in operating rooms that can cause a fire to spark. Such hazards include the use of 100 percent oxygen, alcohol-based skin cleansers and surgical tools including lasers. Most operating room fires occur when surgery is being performed on the head, face, neck or chest because electrical tools are close to the patient's oxygen supply.

Earlier this year, an 86-year-old woman died after burn injuries she sustained to her head, neck and shoulders during a routine biopsy procedure. Bed linens or a neck roll, used to support the victim's head, allegedly caught fire during the procedure and led to her fatal injuries. Before she died, the victim underwent skin grafts in which skin from her right leg was grafted onto her shoulder and neck area. However, the patient later died from her injuries. A malpractice lawsuit has been filed in the case.

If you or a loved one has suffered injury from a burn, please contact a lawyer involved in the [Burn Injury Lawsuit] who will review your case at no cost or obligation.
Request Legal Help Now