A truck driver who sustained a horrific burn injury when a tanker truck exploded on May 5 has launched a lawsuit against AGE Refining Inc., alleging that the defendant was negligent when it failed to eliminate all sources of ignition near combustible fuels. 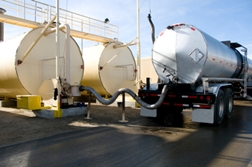 According to the 7/3/10 issue of the San Antonio Express-News, Allen Ramirez was employed as a driver for Andrews Transport, operating a tanker truck. While stationed at the AGE refueling plant, a sudden explosion left the driver of the tanker writhing on the ground, on fire and in obvious distress. It took a posse of 100 firefighters more than six hours to bring the fire at the fueling station under control.

More BURN INJURY News
The burned driver was not identified at the time of the explosion. However, in a lawsuit filed on June 30 in the 150th District Court, Ramirez identified himself as the driver injured in the explosion. Desiree Ramirez, a minor, is also named as a plaintiff in the action, together with Mary Mercado, described as a "next friend" of Desiree.

AGE Refining said in a statement: "We cannot comment on the litigation itself.
The San Antonio Fire Department determined that the incident on May 5 was an accident. We are still awaiting the final ruling on the cause of the accident from the Occupational Safety and Health Administration (OSHA)."

The plaintiffs in the burn accident lawsuit are requesting that AGE list every injury or death from fire or explosion that has occurred at its locations in the past decade, as well as all citations from OSHA in the last ten years. Ramirez claims to have suffered serious, permanent, disabling and disfiguring injuries from his burns.