LAWSUITS NEWS & LEGAL INFORMATION
Home Page >> News Articles >> Newborn in a Coma after Being Burned in ..

Newborn in a Coma after Being Burned in Hospital Incubator

A 12 hour old baby was severely burned, at Mercy Hospital in Coon Rapids, when the oxygen hood he was wearing caught fire. The oxygen hood is a device used to supply additional oxygen, and fits directly over the baby's face.

The newborn was lying in an open-topped bassinet under a warmer, when "for reasons unknown at this time, something within the oxygen-enriched environment of the bassinet ignited," the hospital said. Nurses, who were monitoring the newborn, put out the fire immediately. 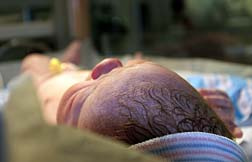 Paramedics transferred the baby to Hennepin County Medical Center (HCMC), where he remains in critical condition, on a ventilator, and in a medically induced coma. According to Dr. Leslie Smith, assistant director of the hospital's Burn Center, the baby is responding to treatment and "most likely" will survive.

The family's attorney, Chris Messerly, revealed the boy's first and middle names (Maverick Thomas), but not his last name, saying the family had asked for privacy.

Messerly said in an interview with the Associated Press, "The family is doing remarkably well under the circumstances. This is a mother who's never held her son, who's not allowed to touch her son." Maverick's mother can only approach him in full surgical garb.

Maverick became the youngest patient to be treated at Hennepin County Medical Center's burn unit. "This is our first experience with burns at this age," said Dr. George Peltier, a plastic surgeon at the burn center.

The HCMC Burn Center is a 15-bed intensive care unit that provides comprehensive burn care for adults and children. According to the hospital's web site, the Burn Center is verified by the American Burn Association and the American College of Surgeons.
Several agencies are investigating the fire, including, Allina Hospital and Clinics officials, the Coon Rapids Fire Department, the State Fire Marshall, the Minnesota Health Department and the Food and Drug Administration.
According to Coon Rapids Fire Chief John Piper, the investigation is looking at all of the items that were in the warmer, including an IV, oxygen hood, and blankets. He added, "The investigation is ongoing, and when it's ongoing, we don't release anything. It's probably going to be awhile before we know the cause".
According to the ECRI Institute, a nonprofit health research agency, Airway surgeries that involve ignition sources to cut or coagulate tissue (e.g., electrosurgical units, lasers) pose a significant and sometimes deadly risk of fire.

Hazards exist when these ignition sources are used in the oxygen-enriched atmospheres (i.e., atmospheres containing more than 23% oxygen [O2]) that are commonly present in the airway during surgery.

They estimate that 50 to 100 fires annually ignite during surgeries performed in the U.S. The institute says those fires kill one to two people annually, and 20 percent of the affected patients suffer serious injuries.

Based on the limited information we currently have on the source of the fire, it appears that a case for a defective product resulting in personal injury, might eventually be filed. But, until an official statement is issued on the root cause of the fire, it will be difficult to know for sure. We must first know to what degree human actions contributed and/or caused the start of the fire. We could be looking at a case of Medical Malpractice.

Chris Messerly, the family's lawyer, said the fire shouldn't have happened, but that the family is focused on letting their baby heal and is not yet considering legal action.

The family will have plenty of time to consider legal action, as Maverick will spend several weeks at HCMC recovering from his burns. A plastic surgeon at HCMC said he doesn't know what kind of surgery Maverick might need because he's never seen burns like this on a 12 hour old baby.

More News
Burn victims sometimes require skin grafts surgeries. Skin grafts are the surgical process through which the damaged or missing skin of scars or non-healing wounds is replaced with new skin or skin substitutes. There are several techniques available that may be used during a skin grafts procedure. For example, Autografts are skin grafts that take skin from one area of a patient's body and transplant it to another. Allografts use skin from a donor transplanted to the burn patient. Xenografts use tissue that has come from another species. An artificial material called Integra dermal regeneration template has also been approved by the FDA.

All these procedures do have one thing in common. They all cause incredible emotional and financial hardship to the patient and their immediate families. The decisions for the parents carry life long consequences. How does a parent decide what procedure to use, and/or if the procedure is required for functional reasons or just cosmetic reasons. The cost of such procedures might result in huge medical bills, which can have a life long financial impact on the entire family.

In order to make objective decisions, at a time of such emotional trauma, seeking the advice of an attorney, is not only smart, but a must!