The mother of a former North Medford, Oregon High School football player is suing the local school district due to a brain injury that was suffered by her son following a football game, according to the Medford Mail Tribune. 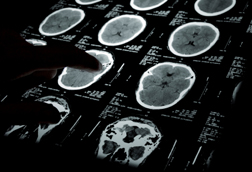 Theresa Pinder, the mother of Nicholas Harris, filed the suit on behalf of her son after he was allegedly placed back into a football game after sustaining a concussion. This allegedly led to a brain injury that she is currently seeking $585,000 for, the news source reported.

"My main concern is for the proper training of the coaches, what to look for with head injuries," Pinder told the Tribune. "I would hate for any family to go through what we've endured. It's been a long road."

Harris allegedly sustained a concussion following a collision that took place on the field, and after he was placed back into the game, he collapsed into seizures on the field. The sophomore was then taken to the hospital.

"Nicholas was in a full-blown seizure," Pinder told the news source. "He's fortunate to be with us."

After he arrived at the Rogue Valley Medical Center, Harris ended up in a medically induced coma. The young man allegedly still suffers from the effects of the brain injury, according to the news source.

More BRAIN INJURY News
The coaches for the football team allegedly told Harris to "just try and stick it out" after he approached them and relayed his opinion that he may have suffered a concussion. Nicholas was then allegedly sent back into the game and suffered the seizures on the sideline following another severe hit to the head, the news source reported.

According to the Tribune, the suit alleges that he should have not been sent back into the game following his expression of an injury, and the coaching staff should have sent him to a qualified trainer before taking any action.

"Injuries are permanent and severe and will have lifelong impact on the quality of Mr. Harris' life," the lawsuit says.

A local CBS affiliate reported that the school district has responded to the allegations, and has noted that the best interests of students are the top priorities in the proceedings.

Superintendent Phil Long told the news source that he couldn't directly comment on the case but noted, "As in all cases, student safety has always been a concern of ours."

If you or a loved one have suffered losses in this case, please click the link below and your complaint will be sent to a drugs & medical lawyer who may evaluate your Brain Injury claim at no cost or obligation.
Request Legal Help Now