However, it is only recently that the issue of psychological trauma has been researched in the context of traumatic brain injury. When diagnosing psychological trauma, there are two possible diagnoses. The first, an acute stress disorder is, by definition, a short-term phenomenon, lasting between two days and four weeks. The second entity, post-traumatic stress disorder (PTSD), lasts for a month or more. 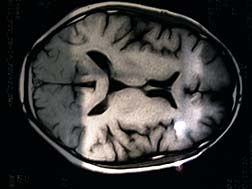 In both cases, there must have been a precipitating event that involved the threat of significant physical injury accompanied by intense fear. In addition, both share a number of symptoms including re-experiencing the event in some form, avoidance of reminders of the event, emotional numbing, and increased physiological arousal . Estimates of the percentage of individuals with mild traumatic brain injury with symptoms of either acute stress or post-traumatic stress disorder range widely, from 0 to 48%.

There is some controversy regarding whether a stress reaction can occur when there is "post-traumatic amnesia" . This refers to a lack of recall of the accident due to neurological disruption of memory systems by the physical force involved in head injury. Some argue that if individuals have no explicit memory of a traumatic event, they are protected from developing a psychological reaction to the event.

More Brain Injury News
The diagnosis of an acute stress reaction or a post-traumatic stress disorder in addition to a mild traumatic brain injury is complicated by the overlap in symptoms between the two. In particular they may share:
1) increased physiological reactivity (the way the body copes with stress)
2) inability to recall aspects of the event
3) decreased interest in former activities
4) blunted affect
5) sleep disturbance
6) irritability and
7) difficulties with concentration.

Therefore, diagnosis of a stress disorder in the context of a mild traumatic brain injury involves careful assessment of both the shared symptoms discussed above as well as symptoms distinctive to each. A comprehensive neuropsychological evaluation is typically required to clarify these issues.