Brain injury involving professional football players has been finding increased traction the last few years, and is especially palpable during Super Bowl season. While the big game has come and gone, concern over concussions in professional sports and particularly professional football remains. And an event that had the entire football world reeling in the spring of 2012 is now about to reverberate through the courts. 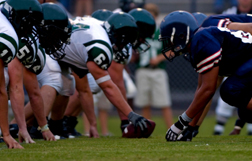 To that end, the family of the late Junior Seau has filed a wrongful death brain injury lawsuit against the National Football League (NFL) as well as a prominent helmet manufacturer. Among the allegations are circumstances that may have directly or indirectly led to the popular NFL star taking his own life in May of last year. The plaintiffs believe that Seau’s tragic suicide was the result of brain trauma incurred from a 20-year career in the NFL.

Concussions have historically been a part of professional football. However, until recently, it is alleged that little attention was paid to the outcome of concussions left untreated. Football players were judged against their stamina to “get back in the game,” regardless of the severity of a hit occurring just minutes before.

Studies of the brains of former professional sports players who died with their brains intact, and left to be analyzed and examined through the latest in medical science, have uncovered a trend - the appearance of chronic traumatic encephalopathy, or CTE. Abnormalities associated with CTE have been linked to behavioral changes, among other issues stemming from untreated or ill-treated brain trauma.

Prior to Seau taking his own life on May 2, 2012, his family states that Seau suffered from depression, insomnia, anxiety, alcoholism, gambling and sex addictions. He was also struggling with business failures and was near bankruptcy, according to The San Diego Union-Tribune (1/24/13).

Tellingly, Seau died of a self-inflicted gunshot wound to the chest. At least one other professional football player took his own life in similar fashion, sparing the brain from damage and allowing for scientific analysis. Following the tragedy, Seau’s family donated his brain to the National Institutes of Health. As the result of analysis, abnormalities were duly found.

The brain injury lawsuit was filed January 23, 2013, in California State Superior Court in San Diego. According to claims made and implied in the lawsuit, filed with the help of their brain injury lawyer, “the NFL knew for decades of the harmful effects of subconcussive and concussive injuries on a player’s brain,” the lawsuit states, further alleging that the league “actively concealed these facts from the players and the public.

“The NFL knew or suspected that any rule changes that sought to recognize that link (to brain disease) and the health risk to NFL players would impose an economic cost that would significantly and adversely change the profit margins enjoyed by the NFL and its teams,” the lawsuit states.

The Seau family is also going after Riddell Inc., official supplier of helmets to the NFL since 1989. The suit claims that Riddell was “negligent in their design, testing, assembly, manufacture, marketing and engineering of the helmets” used by NFL players.

Seau, 43 at the time of his death, was married and left four children.

More BRAIN INJURY News
In studying Seau’s brain and the potential aftereffects of traumatic brain injury, Dr. Ann McKee noted that it may never be known if Seau’s erratic behavior and other problems were caused soley by CTE. “People are complicated,” said the professor of neurology and pathology at Boston University, who is also co-director of the school’s Center for the Study of Traumatic Encephalopathy, in comments published in the Union-Tribune. “Who knows how much is just Junior? But CTE is a factor.”

Dr. Barry Jordan, the director of the brain injury program at the Burke Rehabilitation Hospital in White Plains, New York, and a renowned neurologist who studies brain trauma in athletes, had this to say about such brain injury cases: “We never will definitely know but the behavioral changes that [Seau] was experiencing could very well be secondary to CTE. The behavioral dysfunction may be one of the early signs of CTE, so it is possible.”

Since the suicide of pro football’s Andre Waters in 2006, almost every pro football player whose brain has been studied posthumously has shown signs of CTE. The brain injury lawsuit tally, to date, has eclipsed 4,000, and remains the largest class-action lawsuit in professional sports.