The saga of the National Football League brain injury lawsuits continues, with Travelers Companies Inc filing a lawsuit against the football league. The Travelers lawsuit comes on the heels of thousands of player lawsuits, alleging they suffered a traumatic brain injury while playing for the NFL, and further alleging their brain trauma had a significant effect on their quality of life. 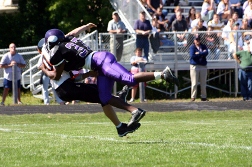 The Travelers lawsuit was filed in August 2012 and alleges Travelers provided liability coverage for NFL Properties but not the NFL itself, Reuters reports (8/22/12). Therefore, Travelers claims, it is not liable for costs associated with NFL lawsuits. Earlier the same month, the NFL filed a lawsuit against 32 insurance companies, to force them to pay for the NFL's defense against the player's traumatic brain injury claims.

More than 2,400 retired players allege the NFL knew that there were serious risks associated with repeated hits to the head but failed to act on that knowledge, putting players at risk of traumatic brain injury. The NFL has denied these allegations and said player safety is a priority.

More BRAIN INJURY News
Professional football players are not the only ones at risk of traumatic brain injury. In September 2012, the parents of a high school football player filed a lawsuit against the school district, arguing that coaches for the football team violated a key rule regarding concussions, which resulted in their son suffering a debilitating brain injury. According to the Yakima Herald (9/19/12), Matthew Newman suffered a hit to the head and sat out from practice but was put in a game the very next day.

The lawsuit alleges Matthew was not cleared by a medical professional to play in the game and the parents say they were never told Matthew was hit in the head. During the game, Matthew suffered another hit, ran one more play and then complained about a headache and numbness. He later fell into a coma and was taken to hospital, where medical professionals performed a craniectomy. Matthew has permanent injuries, including tremors, emotional problems and learning disabilities.