A new study suggests that suffering a brain injury at a young age can have a serious effect on children, including affecting their behavior. Traumatic brain injuries have been in the media lately due to their incidence in amateur and professional sport, and each year millions of people visit the emergency room for brain trauma. 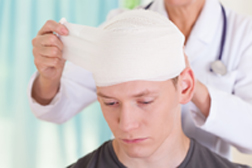 The study was published in the journal PLOS ONE (9/3014). Researchers examined whether sex differences played a role in the psychological effects of traumatic brain injury.

“Studies that have examined adult TBI [traumatic brain injury] outcome following a blunt force trauma to the head during childhood, found differences in TBI outcomes long-term,” researchers wrote. “Specifically, these studies have shown that women experience greater deficits in emotional functioning, whereas men have impairments to memory and cognitive functioning.”

To determine whether either sex, or sex and age have an effect on TBI and psychological health - including academic performance, mental health, substance use and suicide - researchers examined approximately 9,200 students in Ontario between grades 7 and 12. Students were asked if they had suffered a head injury that either resulted in them being unconscious for at least five minutes or requiring a stay in the hospital overnight.

Researchers found that more males than females suffered a traumatic brain injury, although not by a huge margin. Overall, one in five of the adolescents reported sustaining a brain injury that knocked them unconscious for at least five minutes or kept them in the hospital overnight. The most common cause of the TBI was team sports.

They further found that both males and females who reported a TBI also reported daily smoking, drinking, cannabis use, drug use, bullying, academic difficulties and physical injuries when compared with those who did not report a TBI.

“These results indicate that adolescents with TBI are vulnerable to a range of psychological and behavioral harms that co-occur with their history of a TBI,” researchers wrote. It is not clear from the study, however, whether those behavioral issues are a way to cope with the TBI or are caused by the TBI. In other words, do adolescents who suffer a TBI drink to cope with the effects of the TBI or does the TBI itself cause a predisposition to drinking?

More BRAIN INJURY News
Researchers also found that females with a TBI were more likely to report psychological distress, suicidal ideation, being bullied and cigarette smoking than males. The study’s authors noted that the study relied on self-reported data gathering, which could affect the results. Furthermore, it did not provide a way to determine the severity of the TBI each individual suffered, so severity of TBI could be another factor in the results.

Some sports are responding to concerns about traumatic brain injuries by creating guidelines for assessing and allowing players back onto the field after an injury. Lawsuits have been filed against professional and amateur sporting associations, alleging athletes have not been properly warned about the risk of a brain injury or have been pushed into playing too soon after suffering an injury, putting them at greater risk of harm.