Reports of concussions and resulting brain injury have gained the most traction in the public conscience via professional sport inherent with the National Football League (NFL) and National Hockey League (NHL). To that point, many a brain injury lawsuit has galvanized public awareness over sports play that results in blows to the head. And lawsuits in both the NFL and NHL arenas assert that defendants could have done more to alert their players about the potential for injury, and help prevent such injury, but allegedly failed to do so. 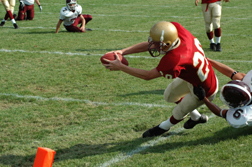 However, professional leagues are not the only target for a brain injury lawyer. That’s because there is sufficient injury at the college football level that dialogue surrounding potential failure of college leagues to protect their players is equally at home there, as well.

Just as the NFL has been hit with brain injury lawsuits over concussion prevention (or lack thereof), so too has the National Collegiate Athletic Association (NCAA). Various players who have suffered brain trauma as the result of concussion have launched a brain injury lawsuit against the NCAA, accusing the Association of not doing enough to prevent concussions. The Association has always countered with the observation - a common assertion - that football is a rough sport and head injury is always a risk.

However, a recent legal opinion by a magistrate places the simple assertion of football being a “rough sport” as a definitive legal defense in some doubt, while providing added weight to the plaintiff’s position with regard to brain injury law.

The brain injury lawsuit, brought by former college football player Matthew Onyshko, accuses the NCAA of failing to uphold its duty of care to its players. The NCAA, in defense, attempted to have the lawsuit dismissed on grounds that it did not owe such a duty of care.

However, Magistrate Judge Cynthia Reed Eddy of the US District Court for the Western District of Pennsylvania, in an opinion filed in late May, signaled that things are not quite that simple.

In a nutshell, no one would argue that football is a rough sport, and injury is always a risk. But in denying the NCAA’s motion to dismiss, Magistrate Eddy found that the plaintiff’s claim that the NCAA possessed more knowledge about the long-term consequences of concussions than players did, had merit nonetheless.

Just who has the greater level of knowledge here?

“While it is true that getting hit in the head is an inherent risk of football, plaintiffs assert that the NCAA increased Mr. Onyshko’s risk of long-term injury by failing to disclose crucial information as well as failing to have procedures in place with respect to returning to play after sustaining serious head injuries,” Judge Eddy said. “Therefore, it cannot be said that Mr. Onyshko voluntarily exposed himself to risks of which he was not aware.”

The plaintiff played college football over a four-year period, from 1999 to 2003. Over that time, according to the brain injury lawsuit, Onyshko endured numerous blows to the head, and has experienced episodes where he lost consciousness for 30 seconds at a time or longer. Fast-forward to today, and Onyshko exhibits ongoing brain trauma that has fostered what is described as a progressive brain and spinal cord injury, leaving him with symptoms reminiscent of Lou Gehrig’s disease.

More BRAIN INJURY News
The plaintiff’s TBI lawyer argues that the NCAA owed Onyshko a duty of care because of the defendant’s “overwhelming knowledge” of long-term concussion-related health effects when compared to information available to players, and given the strict control the NCAA imposes over player training.

While the magistrate’s opinion spoke not to the merits of the case but rather the petition to dismiss, the opinion nonetheless fosters a direction for current and future brain trauma plaintiffs to follow toward a viable cause of action.

The case is Matthew Onyshko et al. v. NCAA, Case No. 2:13-cv-01791, in the US District Court for the Western District of Pennsylvania. The lawsuit, with help from Onyshko’s brain injury attorney, was filed in December of last year.