The family of Derek Boogaard, known as the “Enforcer,” has filed a wrongful death lawsuit against the National Hockey League, blaming the organization for a number of brain injuries he suffered during his career, and also blaming the NHL for his subsequent addiction to narcotics. 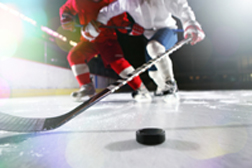 Derek Boogaard was only 28 years old when died two years ago. According to the wrongful death lawsuit filed in Cook County Circuit Court, the NHL “Enforcer/Fighter,” also known as “the Boogeyman,” was posthumously diagnosed with Stage II Chronic Traumatic Encephalopathy, a neurological condition believed to be caused by repeated brain injuries; in Boogaard’s case, by repeated blows to the head. He scored only three goals in his six-season career but took part in more than 65 fights.

Through recent studies, retired athletes have shown an association with Chronic Traumatic Encephalopathy and contact sports. Athletes who experience repetitive traumatic brain injury (TBI) over their careers have a greater chance of developing this degenerative disease.

In Boogaard’s tragic case, his repeated concussive brain traumas that were a result of NHL fights apparently led to his addiction to pain killers and sleeping pills. He was under treatment for addiction and went into rehabilitation while playing for the Rangers and Minnesota Wild in 2009. The lawsuit alleges that during the 2008-2009 season with the latter, Boogaard was given 1,021 prescriptions from NHL team physicians, dentists, trainers and staff.

This current lawsuit describes in detail the treatment he received after he entered rehabilitation, and it alleges that the NHL “knew, or should have known, that Derek Boogaard, a known drug addict, with probable brain damage due to concussive brain traumas sustained in NHL fights, was not complying with treatment (at a treatment center).” The lawsuit also claims that the NHL did not enforce its own anti-drug policies against Boogaard after he had already been treated for drug addiction and then had a relapse.

More BRAIN INJURY News
In September 2012, the family filed a lawsuit against the NHL Players Association seeking $9.8 million, but it was dismissed early this year. According to Boogaard’s family, the union, after expressing interest in helping pursue a case against the league, missed a deadline for filing a grievance. A judge ruled the family waited too long to act and dismissed the case.