While a host of consolidated BP lawsuits target the Gulf of Mexico oil spill, damage to property and loss of income and livelihood, another basket of lawsuits will likely be consolidated under a separate multidistrict litigation: those that represent investors and BP employees who have suffered losses in BP stock and employee benefits. 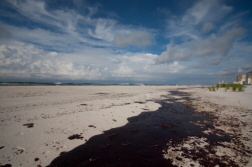 As reported on 8/1/10 in the New Brunswick Telegraph-Journal by way of Bloomberg News, scores of investors have seen their portfolios take a tumble as a result of the massive drop in share price in the wake of the largest oil spill in US history. Those funds managers, who invested in BP stock on behalf of their clients when it may have been imprudent to do so, will likely be facing ERISA lawsuits.

Bloomberg News reports that BP investors' claims will be heard in a separate consolidation in Houston under US District Judge Keith P. Ellison. The respected judge has experience in the portfolio, having presided since May over Transocean's attempts to limit its liability for damage claims. That case will be transferred to a judge in New Orleans who will handle damage claims outside of the realm of securities.

It has been reported that BP set aside $32.2 billion to cover spill costs and legal claims. However, Bloomberg said that Oppenheimer & Co. oil analyst Fadel Gheit estimated total damages from the disaster to exceed that figure by $17 billion.

BP has also set aside $20 billion to pay spill claims, a figure deemed by some as inadequate. A lawyer who represents plaintiffs in investor and BP ERISA lawsuits suggested to Bloomberg that the securities cases might have more value over the long term than the economic loss cases.

Ellison will hear civil securities fraud claims, shareholder derivative actions and claims from BP employees over losses in company retirement savings plans. It was reported that attorneys representing employees will be given the opportunity to argue why they should not be included in the BP securities multi-district litigation, presumably out of a desire to litigate individually.

It appears to have been somewhat difficult to locate judges without some form of conflict. With regard to the New Orleans district where property and income damage claims will be heard, Bloomberg reports that at least six of the 12 active judges recused themselves because of ties to either the companies or lawyers, or because they have oil industry investments themselves.

More BP ERISA PLAN News
US District Judge Carl Barbier, who will preside over more than 300 suits, including wrongful death claims by families of workers killed in the April explosion of the Deepwater Horizon drilling rig, owned bonds issued by Transocean Ltd. and Halliburton. Those companies unsuccessfully attempted to force Barbier to recuse himself in a plea to the US Court of Appeals.

Barbier was described as "an old admiralty lawyer" who is well versed on the Oil Pollution Act. The multi-district panel wanted a judge who was efficient in trying cases, and Barbier was moving the caseload along faster than anyone else.

It is expected that Judge Ellison would be just as efficient and effective in settling claims over BP pension setbacks and those who have suffered losses in BP stock.