The BP oil spill off the Gulf Coast has proved devastating not only for the families of the workers who died in the explosion last month, but also for those who live and work in proximity to the spill. President Obama, who toured the stricken area yesterday, hinted that oil and gas operators like BP will be held accountable and will foot the bill for the cleanup—not the taxpayers. 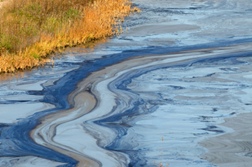 In the interim, while crews are attempting to cap off no fewer than three leaks spewing crude into the Gulf, environmentalists are comparing the devastation to that of the Exxon Valdez oil accident in 1989, which saw 10.8 million gallons of crude oil tumble into Prince William Sound on March 23 after the tanker hit a reef. The Associated Press reports that oil still lingers on some beaches 21 years later, and that some marine species never recovered.

The fear of decades-long contamination is echoed in the voice of Charles Williamson, who toiled in the shipyards for 21 years in the hopes of one day opening a bait shop. He finally did in 2006 in Pascagoula, Mississippi. This year he also completed restorative work on his great-uncle's shrimp boat.

The oil accident could dash his dream. "This (oil) would put a stake in my heart, it would finish me off," said Williamson to CNN, who grew up working on his uncle's shrimp boat during the summers. "This was my dream; I'll probably have to shut this down."

More OIL AND GAS ACCIDENTS News
The last major spill in the Gulf was in June 1979, when an offshore rig in Mexican waters, the Ixtoc I, blew up, releasing 140 million gallons of oil in what is generally considered the second-worst spill in history (the Exxon Valdez was the worst). The well wasn't capped until March 1980, and a great deal of the oil contaminated US waters and Texas shores.

Meanwhile, for the workers who toil on the oil and natural gas drill rigs, risk goes with the territory. Some wonder if those risks will intensify in the wake of President Obama's recent announcement of the expansion of drilling offshore. The Orlando Sentinel reports that workers have been dying in pursuit of oil and natural gas in the Gulf of Mexico at the rate of one every 45 days since the mid-1990s.

Of the 126 on board the Deepwater Horizon at the time of the explosion and fire, 11 were missing and presumed dead. A total of 17 were injured, four critically.

The Deepwater Horizon sank on Earth Day. It continues to spill 42,000 gallons of crude per day.