Oil Spill Could Be Environmental Disaster

An oil leak from a collapsed oil rig in the Gulf of Mexico could prove to be an environmental disaster. According to the UK Times on 4/23/10, the oil poured from the site where Deepwater Horizon exploded and burned for two days before collapsing. Officials report that there were 700,000 gallons of diesel fuel on the rig before the explosion. 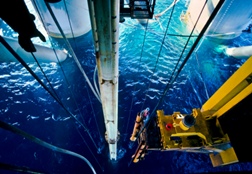 More OIL AND GAS ACCIDENTS News
The Deepwater Horizon floating platform was leased by BP and owned by Transocean. It is not known exactly what caused the explosion, which left four workers in critical condition and 11 missing and presumed dead. Oil from the rig could wind up on the shores of Louisiana, Alabama and Mississippi.

Officials said this could be the worst oil spill since the Exxon Valdez spill, which leaked approximately 11 million gallons of crude oil into the waters of Prince William Sound in Alaska.

The 4/22/10 edition of the New York Times cites a Coast Guard official as saying that there does not appear to be any oil leaking underwater from the deep-water well. Officials do not know why this is so, or whether a leak could still occur underwater. BP announced it is sending more than 30 vessels to skim the oil on the surface of the water that leaked from the platform.