More BP OIL SPILL News
The efforts to clean up the BP oil spill in the Gulf of Mexico encountered a major setback when a robot submarine bumped into the broken well, requiring the removal of the containment cap that had been siphoning off some of the oil. 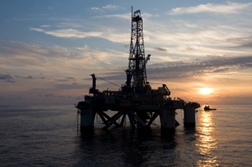 The accident caused oil to resume flowing into the Gulf unchecked, but a replacement cap was attached shortly after, slowing the flow of the oil, according to the New York Daily News. The setback made for a rocky first day on the job for Mississippi native Bob Dudley, who replaced Chief Executive Officer Tony Hayward as the BP executive in charge of handling the oil spill.

The road to fixing the oil spill will not get any easier for BP as hurricane season approaches.

"The tropics are bubbling and the lid is about to pop off for our first threat of the season," AccuWeather hurricane expert Joe Bastardi told the news source.