The US Coast Guard is reporting that tar balls are washing up on the beaches at Key West, Florida, possibly as a result of the BP oil spill in the Gulf of Mexico. NBC television news is also reporting tar balls on Treasure Island in the Florida Keys. 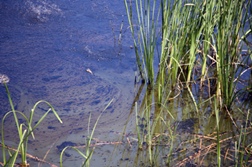 If the tar balls are from the Deepwater Horizon well, located about 80 miles off the coast of Venice, LA, it could mean that the slick has been picked up by the Loop Current, which could take the oil into the Florida Keys and out into the Atlantic ocean.

So far, millions of gallons of toxic oil have spewed into the gulf, with BP only recently managing to stem less than half the daily flow from the well.

In addition to threatening fragile ecosystems along the coastlines of Alabama, Mississippi, Louisiana and Florida, deep water reefs are also in danger of being smothered, and turtles are reportedly washing up dead on the shores of the Gulf.

More BP Oil Spill News
The men and women who make their livelihood from fishing and tourism in the Gulf are also feeling ever-worsening effects of this environmental disaster. Earlier today, federal officials announced they have expanded the "no fishing" area in the Gulf of Mexico because of the slick.

According to a report on MSNBC.com, the National Oceanic and Atmospheric Administration has closed nearly 46,000 square miles, or about 19 percent, of federal waters in the Gulf. NOAA Administrator Jane Lubchenco said this is in response to the oil slick moving southeast, which could indicate that it has or will be picked up by the Loop Current and will possibly end up in the Gulf Stream which runs along the eastern seaboard, threatening the ecosystems and livelihoods of the people in Georgia and South and North Carolina.