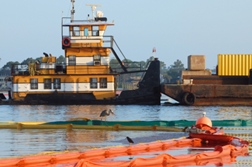 Reports from Bloomberg indicate that BP has lost more than half its market value as a direct result of the Deepwater Horizon oil rig explosion and resulting environmental catastrophe, which has been playing out in the Gulf of Mexico for nearly two months and shows no signs of being remedied soon.

The lawsuit, filed in federal court in Chicago, is seeking class action status. The suit reportedly states that the employee savings plan is for full-time, part-time, occasional and temporary BP employees. The plan held $2.45 billion worth of BP American depositary shares, or 29 percent of its $8.27 billion assets, as of the December 31, 2009.

The lawsuit states, "Defendants knew or should have known that investment in BP Plc equity was -- and continues to be -- an imprudent investment of the ESP's assets due to serious mismanagement and improper business practices that resulted in catastrophic incidents of international significance, including, among others, the BP spill in the Gulf of Mexico."

Click to learn more about LawyersandSettlements.com
LawyersandSettlements.com is an online news and information site for the general public and legal community. As a legal news resource, we have emerged as an independent & trusted voice. We provide detailed and quality information on various lawsuits filed including Antitrust Cases, Business Frauds, and Environment Cases.