More oil News
Eleven or 12 people were reported missing and 15 injured – seven critically – in the explosion of a BP oil rig located off the coast of Venice, Louisiana at 10 pm on Tuesday evening. The majority of people working on the rig – about 126, reports indicate – are believed to have escaped safely. 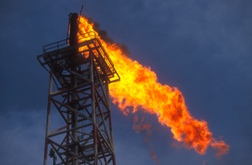 The rig, called the Deepwater Horizon, is on fire and listing at 70 degrees. Coast Guard Senior Chief Petty Officer Mike O'Berry told reporters from MSNBC.com that the rig "is burning pretty good and there's no estimate on when the fire will be put out." He explained that many of the workers who were fortunate enough to have escaped were being brought to dry land on a workboat. Authorities are searching for any signs of lifeboats and missing workers.

The rig, under contract to BP PLC from Transocean Ltd. of Houston, was reportedly drilling but not in production. The six BP employees on the rig were safely evacuated.

The cause of the explosion is not yet known. All efforts are currently focused on search and rescue. O'Berry said that environmental assessment teams from the Coast Guard are on standby in Morgan City, LA, and will begin to assess the environmental damage once the fire is out.

Click to learn more about LawyersandSettlements.com
LawyersandSettlements.com - A trusted, independent legal news provider bringing quality news and information on all legal cases and lawsuits filed in United States of America to its readers since 2002. Over 250,000 legal help requests including Accidents, Environment Cases, and Personal Injury Cases have been forwarded to lawyers all across to the country.