Botox injections used for the aesthetic purpose of eliminating lines and wrinkles are becoming tied to some sober results from reactions. Some reactions have been serious enough to cause death in users. The announcement was allegedly made by the Food and Drug Administration (FDA).

The reactions have born a striking resemblance to those found in cases of botulism food poisoning. This can cause paralysis and even death. There are allegedly three companies that supply the cosmetic enhancement product: Botox, Botox Cosmetic, and Myobloc within the U.S. The FDA is allegedly planning to implement an ongoing safety review of the product. 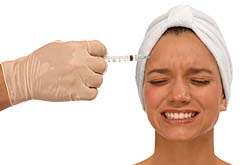 The product allegedly carries an alert on the packaging. The package alerts that there is a "rare potential" for serious side effects including: difficulty in breathing, swallowing, and potential problems for people with neuromuscular problems. In addition, the package warns of potential reactions that may appear near the injected area. Drooping of the eyelids is a possibility after the treatment of frown lines for aesthetic purposes.

Adverse effects have been witnessed in children who have used the product for the ailment of limb spasticity as evidenced in cerebral palsy patients. The use of Botox to treat the condition is allegedly considered to be an "off label" usage of the product, and not its exact intended use. Another "off label" use for Botox has been in the treatment of spasmodic disphonia. This condition is a vocal chord ailment that steals the voice from the party affected.

One person who received the treatment for the vocal chord ailment depended upon her voice for a living. She works as a radio personality and Botox was the answer to her prayers. While she was affected with the ailment she was unable to speak above a whisper. It has been successfully used in many cases, but some people that have used it are concerned about the FDA's most recent, alleged warning about Botox. Some are looking to consult a physician about potential, alleged ramifications of using the product.

More News
The consumer advocacy agency, Public Citizen, is placing pressure upon the FDA to place stiffer warnings on the labels of the product. Public Citizen allegedly petitioned the FDA two weeks ago regarding the matter. The FDA allegedly said it has already mulled this action over for consideration to change the warnings, which may better grab the attention of the American public.

Public Citizen Health Research has looked over information from the FDA between November 1, 1997 and December 31, 2006 pertaining to Botox. Manufacturers of the product allege that 180 cases in America occurred where people developed sobering conditions after receiving the alleged injections. Of the 180 cases, 16 resulted in fatalities and of the 16 fatalities, four people that perished were children.