Botox Patient Not Warned of Risks

Shelly has been diagnosed with Cervical Dystonia—a disorder of the neck muscles—and treatment comprises a series of Botox injections. But she recently heard of its dangerous side effects and worries that the risk might outweigh the temporary relief that Botox provides her.

Shelly had horrific headaches for five years until she was finally diagnosed with Cervical Dystonia (also known as Spasmodic Torticollis or ST). In Shelly's case, it is characterized by her head turning to the left side—and staying there for five years. The disease has resulted in arthritis and deteriorating muscles in her neck. Nobody knows exactly the cause, but ST is either genetic or psychosomatic, Shelly was told. "In my case, they can't tell the cause because I haven't been evaluated by a neurologist for long enough," she says. 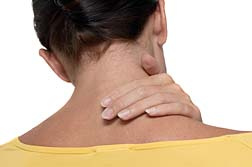 About one year ago, Shelly was referred to a neurologist, who told her that Botox was the most common treatment to make life more bearable. "I was having the most severe pain, every day," says Shelly. "The neurologist set me up for Botox treatment right away.

"After the first set of shots, I had horrible headaches for the next three months, but that was to be expected; my muscles were relaxing and I could turn my neck for the first time. It gave me movement and I lived through the pain. When your body is in one position for a few years, a lot of muscles aren't being used, so you can imagine how much it hurt. But after about three months, the effects wore off and it started to get worse. I was due for my second set of injections.

On the second visit he did another series of shots—I had a total of 290 mg of Botox --and it was OK, I felt better. But he also hit a nerve in my neck and gave me a shot in the back of my head which was terrible.

On my third and last visit, I couldn't hold my head up for six weeks afterward—I had to wear a neck brace. When I told my neurologist what had happened, he just told me to come back if it got worse. I had been reading about all these adverse events associated with Botox, and how so many people had been paralyzed. I asked him if it was safe. 'If we didn't think it was safe, we wouldn't be giving it to you,' he said. But it's really alarming that Botox can potentially spread to the muscles in your esophagus—then you wouldn't be able to swallow.

My next appointment is this June and I am really having doubts. My husband and I were talking about it this morning. I am getting toxins injected into my body and it isn't going to cure me; it is more like a mask to keep my disease under wraps.

My mum has MS and she is paralyzed from the neck down and I have been looking after her all my life. Crazy as this sounds, I've always thought that nothing would ever happen to me because I have to take care of her. But it did happen to me. I risk so much taking Botox but the alternative is brain surgery—I would need something in my brain that is battery-operated and it would have to be changed every four years.

I find it hard to believe there isn't an alternative besides injecting people with poison. If Botox is dangerous, the drug manufacturer needs to be put out of business; isn't there anything else out there?

Maybe it is partly because Botox is a big money maker. It costs the state of California $4,300 for every treatment I have—for 290 mg of Botox. Isn't that ridiculous? On one hand I am grateful but on the other hand I am pissed off; I should have been told the risks. I don't want necessarily want to pursue a lawsuit but I do want to know what the risks are. It scares me because my doctor never sat me down and explained what could happen if something goes wrong.

I have heard of people taking it and months later, having side effects. If anyone is doing this for cosmetic purposes, they're crazy! Everybody gets old and wrinkled so deal with it. But try walking around with your neck turned to the left for five years-- I had no choice. Because of this disease, I haven't worked in six years and now I'm on social security. I am a strong person but can't hold my head up long enough to hold down a job.

The following poem, written by Shelly, captures her feelings of pain and uncertainty...

I can't hold my head straight, the pain is unreal
pulling and pounding is all I can feel

More News
Suffering with this pain every day for five years
if I'm not raving mad, I'm completely in tears

Finally; after all this time,
the doctors give me botox and tell me I'll be fine
I'm not told of the danger that I'm putting myself in
I'm just told it will help me again and again

It was about two months before I got any relief
What about next time? Would it result in more grief?
Having suffered these side effects, I had to know more
now I search for an alternative to stop the pain I endure