Patient Ended Myobloc Treatment before it Ended Him

Tony could handle the side effects of Botox—a dry mouth and dry eyes—until his last set of injections. That time, Tony's doctor gave him a set of Myobloc injections that made his arms numb and he couldn't swallow. "I cancelled my next appointment—if they give me another shot of this stuff, who knows what will happen," says Tony. 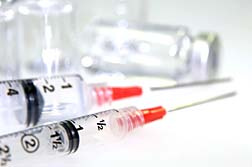 (Myobloc (botulinum B) is used as an alternative for patients who have become resistant to Botox (botulinum A. Even though it acts much fasterb (1-2 days versus 4 days for Botox), its effects only last half as long as Botox. Tony was given Botulinum toxin type B (Myobloc) after he received botulinum toxin type A (Botox).

Tony suffers from Tardive dyskinesia (TD), a neurological impairment characterized by random movements in the tongue, lips or jaw as well as facial grimacing, movements of arms, legs, fingers and toes, or even swaying movements of the trunk or hips. In Tony's case, TD affects the nerves around his eyes, causing him to blink uncontrollably.

He was given 14 Botox injections per session, mainly around his eyes and eyebrows. "I had about 10 or 12 sessions over the course of a few years," says Tony. "The treatments gave me some relief but it was temporary—each time the relief only lasted a few months. Then I was switched to Myobloc because me doctor said I was building up antibodies to Botox."

"That was in April. Right after getting Myobloc, I started getting side effects—big time. They developed overnight. My eyes were so dry that I couldn't work on my computer. I asked my doctor why my vision had changed and he referred me to an ophthalmologist. She couldn't even finish the exam because my eyes so dry. All she could do was give me eye drops four times a day and eye gel at night to hydrate and I can't go back to see her until July. But that is just one of my problems.

I had a tingling in my arms – and still didn't register that Myobloc was to blame. When they started to go numb I thought it was a pinched nerve so I went to ER two nights ago and they gave me a muscle relaxant, a pain killer and an anti-inflamatory med.

A few weeks after getting Myobloc I started to have difficulty swallowing. I phoned my doctor when it first happened and he told me to suck on sugar-free candy which helped. It continued for a few days and wore off but the dryness is still here.

I called the manufacturer and asked them what could happen if I got another shot of Myobloc. Would these meds have a cumulative effect? And the pain in my arm is worse: I can't even lay it down on a desk without shooting pain.

More BOTOX & MYOBLOC News
Their answer was that they don't know, everyone is different. I also found out that Myobloc is commonly given for spasms in the neck and not the eyes. The FDA has not approved Myobloc for eye spasms but I have been told that doctors can use it if they want to. And when I was first treated with Myobloc, I wasn't given any patient information. I assumed that it would be the same as Botox A; no side effects except a slight rash.

I had the last set of shots on April 9th and I have been in pain ever since. After I had difficulty swallowing I went online. Before that, I didn't associate any of these symptoms with Botox or Myobloc but now I am concerned—I found out how dangerous Myobloc really is. But my doctor just says it will wear off. I am supposed to get shots this Wednesday but I cancelled the appointment because it hasn't worn off—my arms are still numb, my eyes and mouth are still dry and if they give me another shot of this stuff, what will happen? What if I can't swallow? I'd like to stick around for a while longer."