Tanya was injected with Botox in September, 2006 for hyperhidrosis—a condition characterized by abnormally increased perspiration. "I just got the one shot and it was supposed to work for six months to control the excessive sweating in my underarms and hands," says Tanya. In 2006, little was known about its adverse side effects. Tanya did not read a quote on the FDA website, stating that Botox is "the most poisonous poison...it can be fatal when used improperly."

About one year later, Tanya was at work one evening (she is a nurse) and felt something wrong so she hooked herself up to the heart monitor. "I was hospitalized with a chronic run of ventricular tachycardia of unknown origin," she says. In layperson terms, this means an abnormal heart rhythm that is rapid, regular and originates from an area of the ventricle, the lower chamber of the heart. Ventricular tachycardias are most commonly associated with heart attacks or scarring of the heart muscle from previous heart attacks; they are life threatening. But Tanya is young (37) and healthy, without any history of heart problems. 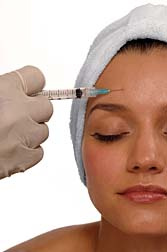 "Most people who are in ventricular tachycardia will have a heart attack but I didn't exhibit any signs, any abnormal rhythm," says Tanya. "At the time, I didn't even think about Botox-- this came right out of the blue.

"I had an echocardiogram afterward—that measures the function of your heart—and no damage was done. I asked my cardiologist if Botox could have anything to do with this but he wasn't sure. Then I read all this stuff about Botox and side effects.

For more than a year, Botox worked to reduce my sweating. It has come back but I won't have another injection. The risk far outweighs the benefits. I started thinking, I'd rather be sweating and be here with my kids than possibly have a heart attack.

I work with babies so the doctors I associate with don't know too much about it but my dermatologist friend told me that he heard incidents of adverse effects from botox injections. A nurse who works with me had Botox for back pain and she noticed the same kind of symptoms that I exhibited. She came up to me at work one day and told me her story. It makes me wonder how often this has happened."

More News
In a separate incident, Joan Motes suffered an injury two years ago that caused muscle spasms in her neck. Surgery couldn't help so she was injected with Botox on December 23rd. By Christmas Day, her throat was swollen and she couldn't swallow; the ER doctor said it was likely that Botox had caused partial paralysis.

"I was scared to death," says Motes, aged 65. "I had also lost a lot of weight from not eating for a few days." Her daughter had bought some Ensure shakes which Motes barely was able to drink; food was out of the question. "When I got to the hospital, I had to drink some fluid and they took x-rays, then the doctor put a light down my throat. He saw lots of nodules but didn't know the cause-- I was given antibiotics and pain killers.

"I think that when I had this round of Botox injections (it was the second round), the doctor completely missed my muscle and injected it into my bloodstream. Now I just suffer the pain—I can't go through that again."

Posted by
Carolyn
on September 12, 2013
I have had 3 series of injections of Botox in my neck for cervical dystonia. A few days after the first series of shots I choked on a piece of pork chop. My tongue did not work to push food back in my mouth to be swollowed. Over the 3 months this series of shots made a huge improvement on my dystonia, but the choking and aspirating continued. I discussed this with the technician at the next series of shots and he dismissed this as normal. I continued on for the next 2 series of shots. I had difficulty breathing, continued choking and aspirating on thin liguids such as water. My last shots were at the end of March 2013 and it is now Sept. 2013 and the botox should have worn off. My voice is severly affected. It is very difficult to speak and I talk very slowly. I experienced pneumonia and a flu like illness that resulted in a long lasting cough. The cervical tremors have not returned to the extent that they were originally. I was sent to the ER by my general doctor who was concerned about me. Nothing was done in the ER that changed my situation and I was told to return to my general doctor. I went back to the neurologist and he had no answers. Botox can travel through your system and affect areas away from the injection site. My next doctor visit will be to an ENT.