"I want the World to know about Botox"

"I would like to get up and scream to the whole world about the terrible things that happened to me after my last series of Botox injections," says Eloise. "I want people to know that Botox is frightening." Unfortunately, Eloise can't get up too easily—she can barely lift her head.

In December, 2007 something "went terribly wrong." Eloise had been taking 200 units of botox four times per year for the past few years - for relief from cervical dystonia, and it had provided her with some relief. 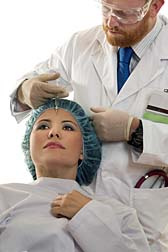 (In December, 2000, the FDA approved the use of Allergan Inc.'s botox for the treatment of cervical dystonia (CD). Injections of this product are meant to decrease the severity of abnormal head positioning and postures as well as associated neck pain. CD, also known as Spasmodic Torticollis, is characterized by involuntary movements of the head as a result of muscle spasms in the neck and shoulders. Spasmodic Torticollis can also cause pain in the neck or shoulders.)

One series (of several injections) consisted of 200 units, but for some unexplained reason, Eloise was given 300 units on her last visit. "During that visit, one of the needles hit a nerve and I remember yelping, it was quite painful," Eloise says. "My husband even heard me out in the waiting room. The pain eventually left but I never got the relief.

"When I got home, my neighbors said I looked terrible. By the next day I looked worse. I didn't even consider that it could have been due to botox. I seemed to be in more pain, weak and shaky. As well, I have a balance problem but it has never been disabling. Now, it was really bad. On the third day, the muscles in my neck were all limp and soft and I couldn't hold my head up.

Dumb me, I still didn't connect it with botox. But I had never heard of any adverse events with the drug, nor had I been warned. That was December 19th. Just before Christmas I was getting scared. I literally couldn't hold my head up at all. Then my eyesight was affected—blurry vision, which I still have. Then I fainted and fell, three times between Christmas and New Year's Day. Louis, my husband of 60 years, told me that we were going to the hospital.

At ER, they checked me for brain stem stroke, all kinds of things. They kept me overnight and the next morning told me they couldn't find anything wrong, although they knew something was wrong.

I was getting worse. I had an appointment with the neurologist on January 8th—he was giving me the botox injections. But on the way to my appointment, I got very sick and told my husband to take me to hospital. I missed the appointment. The neurologist saw me at the hospital the next day and the following day, he and his partner took themselves off my case and said 'I was not their problem.' Why did they do that?

I was in hospital for a few weeks and wasn't allowed out of bed. Sometime in late January, I was sent to a nursing home, where I stayed for 10 days until I came home.

My husband bought a soft-collared brace for me to help hold my head up. I am gradually getting better but I will never take botox again. It is too coincidental that these symptoms occurred right after the increased dose of botox. And it affected my brain in some way, although I didn't have a stroke.

I didn't put two and two together until I was in the nursing home. One day it just occurred to me that I was fine before the last set of injections; it dawned on me that the doctors had ruled out everything else—no stroke, nothing, yet I was terribly disabled.

In late March, I was hospitalized yet again and they ran a multitude of tests. Still no diagnosis. I discussed botox with my general physician and he indicated that it was a possible cause. He has since done some research and is beginning to come around to my way of thinking.

I did some research on the internet and looked up treatment for cervical dystonia. I knew I was getting botox but then I discovered some articles about the side effects, such as paralysis. I was shocked, thinking that my neurologist knew what botox had done, because to this day he has never called. And I haven't called him. He hasn't scheduled any more appointments.

I am really afraid of going public—who will treat me if I do? I never felt my age until this happened."

Posted by
Lisa
on February 18, 2017
Botox in my neck for cd two years now. I now have tendinitis in both bicep tendons. My arms hurt most of the time, never did this happen before the Botox treatments.

Has anyone else had this happen?

Posted by
Pat stinson
on June 24, 2016
I have oromandibular and cervical distonia. My neurologist put 50 units of Botox in each jaw( extremely painful). 10 units under my chin and the rest was put in the muscle down my neck and top of shoulder(290 units total).
This was my first and last visit.
I had severe reaction. My bottom jaw was "Frozen to the point I could barely open or move it at all. Eating was almost impossible. My throat was so tight I was breathing very shallow and speaking was difficult and exhausting. I couldn't hold my head up and had to use a cervical collar. The pain in top of the shoulder was so severe I could do nothing but lay down for a month. Driving was out of the question as I could not turn my head in either direction. It's been six weeks and I still have great difficulty eating and swallowing( doing a lot of choking). Can't bend over and speaking is still uncomfortable as I feel like my throat is being squeezed tightly.
The neurologist was very nonchalant at my three week follow up and said I had a bad reaction that most people don't have. He wouldn't admit he gave me too much Botox for a first time visit. He said " next time we'll only give you 200 units". He should have started slow and worked his way up instead of going to the max right away. I'll never have Botox again and that doctor needs to go back to med school. I trusted him because he said he had 26 experience dealing with this disorder.

Posted by
Doris Kilpatrick
on September 29, 2015
On September 1, 2015, I was given Botox injections by my neurologist for a diagnosis of Cervical Dystonia. Now I cannot hold up my head. I am told it is as a result of the Botox injections. I would like to know if when Botox wears off will I regain control of my head.
Posted by
Paul Nanna
on July 24, 2014
My sister is now dead.
She received botox for cervical dystonia.
Began a high fever and in 3 days was found on her couch non responsive. DOA at the hospial in Tulsa OK.
I am waiting for the medical examiners report.
Sad and angry.

Posted by
LAURI MICHAUD
on June 23, 2012
I FEEL BOTOX PUT ME IN THE HOSPITAL IN MARCH 2012. MANY FACTORS INVOLVED BUT THE BOTOX SHUT MY MIND OFF-WENT HOME AFTER 1ST BOTOX INJECTIONS: WITHIN 24HRS I STARTED WITH HANDCRAMPING, THEN STROKE-LIKE CONDITIONS, MENTALLY CHANGING AT HOME. NEXT IN ER TWICE- WENT TO DOC AFTER AND I ASKED TO BE ADMITTED TO HOSPITAL. THEN IN ICU FOR 11 DAYS; IN ER, DAY AFTER DISCHARGE- ONE MORE TIME. BLAMED EVERYTHING ON OTHER THAN BOTOX, ACUTE ENCEPHALOPATHY & STROKE LIKE SYMPTOMS, TOXICITIES- NONE I'D EVER HAD, NONE EXPECTED.
Posted by
stranger
on September 26, 2011
The same things happened to me!!! I wouldn't be surprised if it were the same doctor not paying any attention to details. I had injections of 100 units with guidanceand the pain relief was AMAZING for almost an entire year. When I returned for the second it was extremely painful, unlike the first time, no guidance, I left in tears, and was given 300 units. Each day after I got worse and worse until I couldn't even get up on my own. I spent months recovering in physical therapy and trying to just have feeling. I saw a neurologist and he told me I was overdosed. 300 is the standard adult dose. BUT I am five foot tall and 120lbs, not such and average adult, not to mention I am a neurology nurse. I should have known better! Anyhow, thanks for sharing your story.