Botox Could Leave You Breathless

Recent concern over adverse effects, including deaths stemming from injections of Botox and Myobloc for both cosmetic uses and muscular conditions appear to carry much more weight in Europe, than it has in the US.

It also appears to carry more weight with consumer advocacy groups such as Public Citizen, than with the US Food and Drug Administration (FDA), the agency entrusted with the health and well being of the nation. 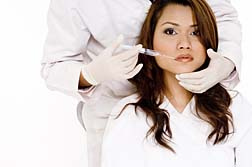 The FDA issued a communiqué February 8th warning of the potential for rare, but serious adverse effects related to the use of Botox, Botox Cosmetic, and Myobloc. While it has been suggested that there are no qualitative problems with the drugs, the fact remains that the existence of adverse effects which may or may not mirror results of pre-market trials of the drugs has nonetheless raised a red flag.

However, that red flag has been flying in Europe long before now, according to information contained in a communiqué by Public Citizen, which petitioned the FDA to unfurl that red flag here, and beef up warning labels. The FDA issued its announcement two weeks after the advocacy group issued its petition.

Public Citizen notes that the European Union had long posted a series of warnings and physician alerts about botulinum toxin on its web site, the latest coming almost a year ago, in March of 2007.

In fact, the European Medicines Agency (EMEA), the European counterpart to the FDA, had been posting alerts and data regarding adverse effects as early as 2005. In March of that year the EMEA reported 552 adverse event cases. Of that total 165 were considered serious, and 66 were deemed serious cases with possible systemic effects such as dry mouth, Dysphagia, and/or blurred vision.

By November of that year the number of adverse effect reports had grown to 693, with 17 deaths—six of which were deemed to be caused by aspiration pneumonia.

It should be noted that in 2005 the FDA published an analysis of adverse reactions covering a period 1998 to 2003, highlighting the dangers of botulinum toxins, but appears to have been largely silent on the subject ever since.

And this, from March, 2007: "Distant reactions, including muscle weakness, dysphagia and aspiration represent a significant proportion of all reported serious events associated with the use of botulinum toxin containing products . . . fatal cases have been reported."

On August 9th of last year the Danish Medicines Agency, in concert with the European Pharmacovigilance Working Party, published the findings of a detailed analysis, stating that of the more than 600 reports of adverse effects related to the use of botulinum toxin, it was found that about half of all serious adverse reactions were caused by the spread of the toxin beyond the initial injection site.

The warning highlighted the dangers of muscular weakness and the difficulties in swallowing and breathing—and noted that such adverse reactions were seen in connection with cosmetic, as well as therapeutic uses.

Botox, and Botox Cosmetic (Botulinum toxin Type A) and Myobloc (Botulinum toxin Type B) is approved for a variety of uses, but all relate to muscular manipulation. For example, the treatment of adult cervical dystonia, which is severe neck muscle spasm, and blepharospasm (spasm of the eyelids) are two such uses.

Botox and Myobloc work by injecting tiny amounts of botulinum toxin (A, or B) into a specific region of a problematic muscle, effectively freezing or mitigating the movement and function of the muscle, or portion thereof, for a period of time (usually about four months). This appears to provide relief for a patient enduring muscle spasm—and it is here that doctors stumbled upon the cosmetic use for botulinum toxin.

According to an FDA fact sheet on Botox, while treating patients for eyelid spasms, doctors began noticing that wrinkles around the eyes looked better. The fact sheet suggests that wrinkles may be caused when a muscle tightens. When Botox is injected into the targeted muscle, the toxin prevents the muscle from tightening—hence, the wrinkle is reduced.

Thus, Botox was approved for cosmetic use—but only for wrinkles between the eyebrows. It is not approved, for any other cosmetic use, anywhere.

The ability of Botox and Myobloc to relax, even freeze a muscle and prevent it from contracting is compelling, and useful—so long as the injection does not migrate to any other muscle that can't afford NOT to contract.

However, this appears to be the issue, and the concern—the fact that it can, and does.

A CBS News television report from June of 2002 appears to suggest that migration is possible, when a doctor administering Botox injections at a 'Botox Party' noted that some patients might experience a temporary 'droopy eyelid' effect. The physician described it as the toxin migrating down from the forehead, affecting the eye.

At the time, the concern seemed fleeting. More of an inconvenience, than anything else.

However, the ability of botulinum toxin to migrate to other muscles has people concerned. And even before the EMEA (and the FDA) began sounding the alarm bells in 2005, a look in the rear-view-mirror by Public Citizen to the clinical trials before botulinum toxin was even approved for use reveals that dysphagia was a common adverse reaction seen in clinical trials conducted prior to approval, and occurred in a dose-related fashion. While most case were mild, some severe cases did occur, according to Public Citizen's petition to the FDA.

That can't be said for children, where a number of deaths have occurred—mostly in children suffering from cerebral palsy. Botulinum toxin has been found to be useful in the control of limb spasicity, which is a severe muscle spasm. Studies have apparently shown that Botox is useful in this area.

More News
However, while the FDA is aware of "the body of literature describing the use of botulinum toxins to treat limb spasicity in children and adults the safety, efficacy and dosage of botulinum toxins have not been established for the treatment of limb spasicity of cerebral palsy or for use in any condition in children less than 12 years of age."

The FDA further notes that treatment for limb spasicity in children or adults is NOT an approved use for botulinum toxin in the US.

It suggests, therefore, that there is much unapproved use of the drug going on.

The FDA is taking a wait-and-see approach while it now studies adverse reaction data, as well as additional data requested from manufacturers Allergan Inc, makers of Botox, and Solstice Neurosciences Inc, which manufactures Myobloc.

Public Citizen is calling on the FDA to, among other things, issue black box warnings for Botox and Myobloc.