A boat accident on the Delaware River earlier today ended with all 37 passengers in the river. Two people on board have not been accounted for. 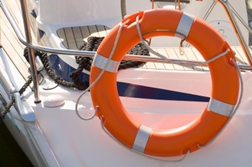 The rescue efforts were reportedly frantic, and the extent of the injuries is not currently known.

The Amphibious Duck, a tourist boat, overturned when it collided with a barge. Two Coast Guard vessels arrived to rescue people from the water, while fire and police lent assistance.

More boat accident News
An eyewitness to the accident, a security guard for the Delaware River Waterfront Corp who was patrolling the waterfront, reported hearing screams from bystanders who also witnessed the accident. "I whirled around as the barge began to run over the duck boat," Larry Waxmunski, told CBS News. "After the barge hit it - it almost looked like slow motion - the duck boat began to turn over. Fortunately, you began to see the life vests popping up almost immediately." That's when the police boats beginning rescuing the tourists from the river.

Another eyewitness, Terri Ronna, of Oakland, NJ, told CBS News that she was crossing the river by ferry from Camden, NJ, to Philadelphia when the captain announced that someone on another ship had fallen overboard and that they were going to rescue him.

"We were not even halfway over when they said there was somebody overboard and we were going to get them," Ronna told CBS News. "There were people all over; we could see all these orange life vests."