At four, he may not be in a position to appreciate his windfall. But the plaintiff in a birth injury case will know in later years the significance of a jury award handed down Friday that gives him a total of $2.3 million in damages. The boy's mother, Cory Spollen of Virginia Beach, Virginia, was awarded $60,000 for reimbursement of medical expenses. 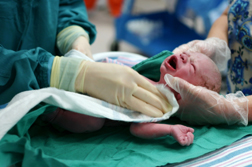 However the lion's share went to Spollen's son, whose right arm was permanently disabled as the result of birth injuries. The award, prudently invested, will yield him ample financial resources to compensate for any challenges the boy may face as an adult.

The Virginian-Pilot of Norfolk reported November 20th that the Virginia Circuit Court lawsuit named Rhonda Bertholf, a nurse-midwife, together with the medical practice of Dr. Richard M. Valentine Jr. M.D., PC. A birth injury attorney close to the case noted that Valentine had nothing to do with the actual delivery. However, given that Valentine's practice had an association with Bertholf, Valentine was named as a defendant in the birth injury malpractice lawsuit.

The infant at the center of the lawsuit was born in November 2006. The actual circumstances of the birth, or specifics as to the birth injury suffered by the boy, were not disclosed.

The birth injury lawsuit commenced on November 15th and the jury returned a verdict November 19th after deliberating five hours.

It is not known if there will be an appeal of the verdict, which will require the further services of a birth injury lawyer.

If you or a loved one have suffered losses in this case, please click the link below and your complaint will be sent to a malpractice lawyer who may evaluate your Birth Injury claim at no cost or obligation.
Request Legal Help Now