A 23-year-old man from Trenton, New Jersey, was killed recently in a bike accident when he was hit by a motorist on Route 1, the Times of Trenton reports. 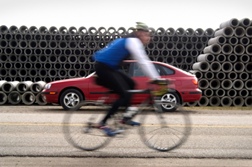 According to the news source, Andrew C. Apai had recently moved into an apartment in North Trenton and was riding his bike home from work. Police say that while he attempted to cross southbound lanes, he was hit by the oncoming vehicle.

More BICYCLE CRASH INJURY News
"From what we can see, he fell in front of oncoming vehicles that were traveling at normal Route 1 speed," said Sergeant Jim Dellaira of the Trenton Police Department.

Dellaira added that witnesses corroborated on the driver's story that Apai "came out of nowhere from the grassy divide" on his bicycle. As a result, Dellaira said that the motorist would not be charged with any crime.

Apai was reportedly rushed to Capital Health Regional Medical Center, where he was pronounced dead less than two hours after the accident, according to the news source.

The death is currently being investigated, but Dellaira said that it will most likely be ruled an accident.

The Trentonian reports that the roadway where the accident occurred was closed down for more than four hours.

If you or a loved one have suffered losses in this case, please click the link below and your complaint will be sent to an accidents lawyer who may evaluate your Bicycle Crash Injury claim at no cost or obligation.
Request Legal Help Now