Just about every bicyclist knows that dooring—when a cyclist hits a car door that suddenly swings into his or her path—is one of the most common kinds of bicycle accidents, yet it hasn't been widely recognized as a traffic accident. But the state of Illinois is about to change that and perhaps other states will follow its example. 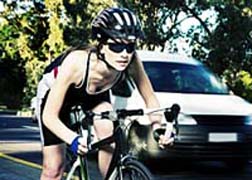 As of April 25, "dooring" will be considered crashes, and Illinois police departments will be required to record dooring accidents on traffic crash forms. Gov. Pat Quinn was prompted to make this change after reading an article in the Chicago Tribune that reported on a long-standing Illinois Department of Transportation (IDOT) policy that excludes dooring crashes from annual state traffic accident statistics because the motor vehicles involved in such collisions are not moving.

The city of Chicago has been tracking dooring accidents for the last three years, according to the Tribune. The city reported 72 dooring crashes last year, but city and transport officials believe that is just a fraction of such accidents because many go unreported. Currently, city law carries fines of up to $500 for opening a vehicle door in the path of a cyclist. As well, the ordinance requires drivers to stay at least three feet away from bicyclists; prohibits left or right turns in front of cyclists; and bans driving, standing or parking in a bicycle lane.

Bicycle advocates such as Daniel Persky, with the Active Transportation Alliance—a safety advocacy group that represents bicyclists—believe that having reliable, state-wide data could help make streets safer, as law enforcement will be better equipped to pinpoint which streets and intersections are riskiest. For more than a year, the Alliance had appealed to IDOT officials to collect dooring data as a means to understand the extent of the problem. IDOT argued that this requirement would "burden police with additional paperwork and that there were few complaints from the public about doorings."

"We were never against collecting the data," said IDOT spokesman Guy Tridgell. "There was never really any large effort to make us aware that doorings could be an issue." Not so, says the Alliance, who points out that dooring accidents are common, based on reports from bicyclists.

More BICYCLE CRASH INJURY News
Just a few weeks before the Illinois law went into effect, the Portland Police Bureau (PPB) cited a man for Hit and Run in a dooring incident that occurred in January. The driver opened his car door shortly after parking and knocked a 34-year-old woman off her bike as she cycled by. The woman was not seriously injured, but suffered cuts and bruises and damaged her bicycle.

The driver asked the woman if she was OK and then drove off without leaving any contact information, according to the PPB, who considered the incident a hit-and-run and forwarded to the Traffic Division for follow-up. Eventually the driver was contacted (in another city) and cited for "Failure to perform duties of driver when property is damaged," which is a class A misdemeanor.

"We do take these cases very seriously," said Sgt. Todd Davis, PPB. Perhaps Portland will be the next city, and Oregon the next state, to adopt a dooring policy, and people may start to look before they open their car doors.
READ ABOUT BICYCLE CRASH INJURY LAWSUITS

Posted by
M. Jackson
on January 30, 2013
Illinois does not take dooring seriously when the ticket for opening a door into a bicyclist and injuring the bicyclist is only $90.00 and a ticket for running a stop sign is $100.00