A Florida man was recently killed in a bicycle accident when he was struck by a sheriff's deputy vehicle. 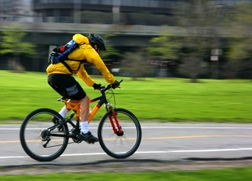 Intelhomme Fene was riding his bike at night in Winter Haven, Florida, when he was hit by a squad car driven by Polk County sheriff's deputy Chad Jackson, according to the Ledger. Fene died at the scene.

According to the Sheriff's Office report, Fene did not have headlights or taillights and was wearing dark clothing and no helmet. In addition, the area where the fatal bicycle accident occurred had no street lights. Jackson, 21, attempted to revive Fene on the scene until emergency medical workers arrived.

Jackson was not injured in the collision and was placed on administrative leave as part of the investigation.

Sheriff's Office spokeswoman Donna Wood told the news source that Jackson, who was hired in 2008, did not have any record of accidents in his patrol car in his file.
READ ABOUT BICYCLE CRASH INJURY LAWSUITS