It's always a tragedy when bicycle accidents befall children, as Patrick and Kim Pearson of Warrensburg know all too well. Their seven-year-old son, Tucker, was out riding his bicycle on April 28 when he was struck by a 2006 Toyota traveling east along Southeast 180 Road, about two miles east of Missouri Route 13. 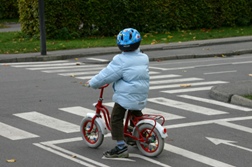 The 5/3/10 edition of the Daily Star-Journal identified the driver as Christine M. Wright, 44, of Warrensburg. According to an investigation by the Missouri Highway Patrol, the child was entering the road from a private driveway at about 7:45 pm when the accident occurred.

An ambulance rushed the second grader to Children's Mercy Hospital, where he was pronounced dead.

More BICYCLE CRASH INJURY News
In another tragic bicycle accident, a nine-year-old boy from Oklahoma died on May 4 after colliding with a pickup truck while riding his bicycle. The El Reno firefighters who responded to the accident found the child wedged beneath the left front tire of the pickup truck. Joshua Cawthon, a student at Lincoln Elementary School, was pronounced dead at the scene, according to a 5/5/10 report by the Associated Press.

It is not known if either child was wearing helmets at the time of the collisions, nor is it known if charges will be laid in the incidents. Investigation into the two bicycle accidents is continuing.

The accidents serve as a needed reminder with the onset of spring that drivers should watch out for children on bicycles. Tragically, bicycle accidents always spike in the warmer months.

If you have suffered losses in this case, please send your complaint to a lawyer who will review your possible [Bicycle Crash Injury Lawsuit] at no cost or obligation.
Request Legal Help Now