Bextra: "They Got Away with Murder"

"I was told that if my mother had lived--as a vegetable in a hospital bed-- there would be a lawsuit, but because she died, there was no recourse," says Dianne Nev. "Pfizer, the maker of Bextra, can't make you a vegetable and get away with it, but they can get away with murder."

"My mother started taking Bextra in May, 2002 after a knee injury; she developed rheumatoid arthritis," says Nev. "And she continued to take it until she had a stroke in December; she took Bextra every day for six months. 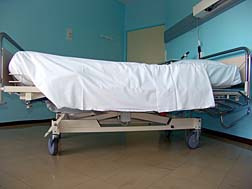 There was no inkling of anything wrong with Nev's mother. Other than arthritis, Nev's mother was healthy; the day before her stroke, she did water aerobics. "She had a headache that morning—she lived with me," says Nev. "I was working in our basement when mother told me she was feeling better and decided to go to the store--that was the last time I saw her. 'I'm going to the store now, I love you,' she said. And that was it."

Apparently she opened the grocery store door and said, ' I think I am having a stroke, somebody please call 911'. By the time I got to the hospital, she was already brain-dead.
She had a stroke and it had traveled through her brain. The doctors told me that if she lived she would be a vegetable. I told them to pull the plug: mother had made a living will saying she never wanted to be kept alive on life support.

My mother was 76 when she passed away, right before Christmas. She bought me a statue of a little girl kissing a snowman and it was titled 'I'm going to miss you.' How eerie is that?

When Vioxx and Bextra were taken off the market, you only really heard about Vioxx, but essentially they were the same drug. About one year after my mother died, I found out that people were involved in a class action suit from taking Bextra. Exactly the same thing happened to them, except they were still alive.

I believe that Pfizer knew the side effects of Bextra before it was ever put on the market and didn't warn anyone. Every day I think about her and it still bothers me. It was her birthday last week and I put flowers in front of her picture.

Even though she was 76 and lived a long life, it isn't right that she died because of this drug. I wish drug companies would be as conscientious about what they give people; would they give Bextra to their mothers? I doubt it."

Pfizer conducted two studies that showed heart bypass surgery patients taking Bextra had a higher risk of stroke and heart attack. Bextra is an anti-inflammatory and in the same class of COX-2 inhibitors as Vioxx. The U.S. Food and Drug Administration asked Pfizer to withdraw Bextra (valdecoxib) from the market on April 7, 2005.

Bextra was only studied in arthritis patients for up to one year before it was prescribed to patients like Dianne Nev's mother.