A Benicar lawsuit alleging Benicar side effects has been disentangled from one if its defendants after a doctor was summarily dismissed from the lawsuit on grounds that his inclusion in the lawsuit was without merit. 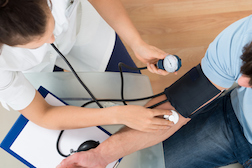 The Benicar illness and weight loss lawsuit is Williamson, D.O. et al v. Daiichi Sankyo, Inc. et al, Case No. 1:16-cv-05371-RBK-JS, in the US District Court for the District of New Jersey. According to court documents plaintiff Alan Williamson had accused Dr. Srinivasa Rao Kothapalli of medical malpractice in his lawsuit against the manufacturers of the oft-prescribed hypertension medication. Benicar (olmesartan) is prescribed to reign in high blood pressure and is thought to be an effective treatment for hypertension. However, Benicar side effects include sprue-like enteropathy, a gastro-intestinal condition characterized by weight loss and chronic diarrhea, in addition to other Benicar side effects.

Benicar lawsuits, which now number about 1,900, are consolidated in multidistrict litigation in New Jersey.

Thus, without any viable pathway to include Kothapalli in the Benicar side effects lawsuit, the defendant’s petition for summary judgement was granted, and Dr. Kothapalli was dismissed from the litigation.

“Summary judgment is warranted here not only because Dr. Kothapalli’s assertions in his affidavit have been unchallenged but also because, taken as true (as this court now must), these assertions necessarily demonstrate there can be no actionable medical liability claim against defendants Kothapalli,” the court said. “To grant a voluntary dismissal without prejudice in these circumstances would subject defendants Kothapalli to the continued threat of litigation without legal actionable basis.

“[P]laintiffs sought, via a liberally?granted procedure, the opportunity to take up a likely indefensible claim in the future.  A voluntary dismissal would leave defendants Kothapalli essentially unheard on their motion to dismiss and eligible to re?experience a highly likely, meritless legal process without recourse to the considerations of judicial economy and fairness,” the court said.

More BENICAR News
US District Judge Robert B. Kugler characterized the inclusion of Kothapalli with the Benicar lawsuit as frivolous. Also not lost on the judge was the fact the Williamson Benicar defective products lawsuit was filed in Texas state court in July, 2016 a full three years after the statute of limitations for medical malpractice suits in Texas had expired (the limitation is two years).

The other defendant in the Williamson Benicar side effects lawsuit is olmesartan manufacturer Daiichi Sankyo Inc.

Two years later, in April 2015 Benicar illness and weight loss lawsuits were centralized in New Jersey. There are some 1,900 lawsuits in the MDL pipeline.

The MDL is In Re: Benicar (Olmesartan) Products Liability Litigation, Case No. 1:15-md-02606, in the US District Court for the District of New Jersey.