After her ordeal with the beef ecoli recall, Diane will never again buy meat in a grocery store. And for now, she can't even imagine eating another hamburger in a restaurant. "I buy all meat from my butcher now and even though it's more expensive, at least I know where my food is coming from," she says.

"I used to shop at Albertsons every week and bought ground beef all the time—in fact I bought the recalled meat twice," says Diane. "My freezer was full of it and my family had been eating this product for some time." So why didn't her whole family get sick? 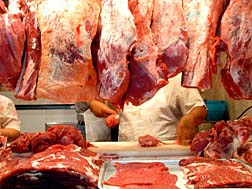 "I have a bad habit of picking ground beef out of the skillet and eating it before it is cooked through," says Diane. "It could have been worse because I could have fed raw meat to my dog. And during that time I was looking after my father—he was recovering from heart surgery. If my father had eaten any of the contaminated meat, it would have put him right back in the hospital, or worse.

"I got really sick on Wednesday, June 6th. I was half way to work when I got really bad cramps in my stomach. They got worse so I turned the car around and headed home. I literally ran to the bathroom-- where I spent the next two or three hours throwing up and when I wasn't throwing up I had diarrhea. I was on the bathroom floor doubled over; it was the worst pain I have ever gone through—even worse than childbirth!

By the time my husband got home (my father phoned him at work) I was exhausted. He drove me to the doctor and I was so weak they put me into a wheelchair while I had some tests. They gave me something to stop the vomiting but nothing helped—it never stopped until I passed out that night from exhaustion. It was horrible.

The lab tests showed some kind of infection (you can't get an absolute ecoli test without a fecal sample) so they didn't know exactly what was going on. My doctor asked if I had eaten anything bad. I told him about the hamburger meat I ate on Monday along with a few other things.

Next, I was sent me to the hospital because they needed to rule out anything else, due to my stomach pains. I didn't want to go because it was going to take another three hours before I could see anyone. This whole thing took until 6 p.m. before I talked to the doctor—it was just about the longest day of my life.

My doctor had figured by now that it was ecoli because the tests came back negative and they ruled out everything else. And the warning about contaminated beef came out right around the same time that I was sick.

My husband first heard about the recall but I didn't pay much attention because he told me it was some other brand. Then my doctor also knew about the ground beef. They called me on Friday to see how I was doing and once the antibiotics kicked in I was okay.

To this day, I still have intestinal issues. My doctor also told me that bowel problems are normal when something like this hits. She said that if I am not normal in a few weeks I have to get a colonoscopy. It's embarrassing and stressful—luckily it hits me first thing in the morning but it really is horrible.

I won't ever buy meat again from a grocery store. Instead, everything I buy now is from my local butcher—he does his own butchering and he purchases meat from our local farms. You sure look at things differently when you go through something like this.

More News
About one month after this ordeal, I debated whether I should call the processor - California's United Food Group--and see if they would cover my medical expenses. That was before I went online and read an article on your site; now I have legal representation - I figured that was easier because I don't know how long it will take and I don't know how serious this could be. Will I have health issues later on?

When I finally recovered I went online and found the recalled lot numbers. Sure enough I looked in my freezer and I still have five packages of recalled meat. My lawyer told me to hang on to them. Through my lawyer, I found out that there was a two-month time frame from the time this company knew the meat was contaminated until we heard of the recall. If my husband didn't hear about it, my whole family might be sick.

Lesson to be learned: don't pick at meat in the skillet until it's completely cooked, and then some.