What's With the Beef?

In the first six months of 2007, the US Food Safety and Inspection Service recalled over seven million pounds of red meat. And the number of cases of people getting sick from contaminated beef is growing as fast as E. coli in an overcrowded cattle pen.

What's up with our beef? Are we going to have a repeat of the ConAgra case? (In July 2002, ConAgra Beef Co. recalled 19 million pounds of ground beef, making it the second largest recall in history. The case began when a few children in Colorado became ill and it rapidly spread coast-to-coast, eventually triggering the recall of over 19,000,000 pounds of ground beef tainted with E. coli O157:H7. One Ohio woman died and at least 35 others were sickened.) 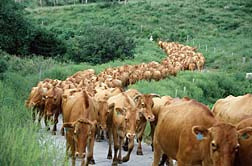 On July 23, 2007 Newsday reported that seven people in Suffolk, including a young girl whose kidneys shut down after being hospitalized, became ill after eating ground beef contaminated with E. coli bacteria. The eight-year-old girl remains in hospital. All seven told health officials they ate hamburgers at home or at backyard barbeques between June 9 and July 3. Other victims of E.coli were reported in Minnesota and California and they all came from the same source: Abbotts Meat Inc. of Flint, Michigan, manufacturer of frozen specialty foods. The company has voluntarily recalled about 27,000 pounds of its ground beef products.

This particular strain, E. coli 0157, a potentially deadly pathogen found in cattle feces, is generally discovered by consuming undercooked ground beef. At a slaughterhouse these pathogens are spread when manure or stomach contents get splattered on the meat. It can cause severe illness and even death—young children, the elderly and people with compromised immune systems are particularly vulnerable.

The Centers for Disease Control and Prevention (CDC) estimate that about 73,000 Americans are sickened by E. coli O157:H7 every year and another 37,000 are sickened by other strains of E. coli also linked to ground beef.

The Meatpacking Industry vs The USDA

The meatpacking industry has been battling the Unites States Department of Agriculture (USDA) for decades.

In 1985 a panel appointed by the National Academy of Sciences warned that the nation's meat inspection system was obsolete. Back then, USDA inspectors had to rely on visual and olfactory clues to detect tainted meat. After an E.coli outbreak from Jack in the Box in 1993, the Clinton Administration announced that it would begin random testing for E. coli O157:H7 in ground beef. The meatpacking industry sued the USDA in federal court to block such tests.

In 1996 the USDA introduced a "science-based" inspection system that required various microbial tests by meatpacking companies and by the government. Still, consumer advocates argued that the federal government should conduct more testing for dangerous pathogens and impose tougher penalties on companies that repeatedly fail those tests.

More News
In 1998 the United States Department of Agriculture (USDA) stopped testing for E. coli at one of ConAgra's facilities; it believed internal safeguards were sufficient. Some testing was carried out by the USDA at other plants but for the most part, big packers were allowed to conduct their own in-house tests. One month before the ConAgra recall, 33 in-house tests came back positive for E. coli contamination but ConAgra did not notify the USDA. Obviously, self-regulation is not safe for the consumer.

In November 1999, the USDA closed a meatpacking plant for repeatedly failing salmonella tests. Supreme Beef Processors, with strong backing from the meatpacking industry, sued the USDA, won the lawsuit and actually succeeded in overturning the USDA's salmonella limits.

Until we get stringent safety measures in place, it would be wise to eat your burger "well done".